The Hellraiser series enters its straight-to-video phase with a classic straight-to-video move: Basically tacking the series title and imagery onto a completely unrelated story. Pinhead appears for maybe three minutes of Hellraiser: Inferno, in contrast to his dominant roles in the third and fourth movies, and the whole mythology is barely mentioned and could easily be replaced without changing anything about the movie. For some fans, this seems to be a plus, and I agree that Pinhead had gotten cartoonish over his last two appearances. If he had shown up to add menace and atmosphere to an otherwise effective and unsettling horror story (as he did in the first two movies), then his relative absence would have been forgivable. 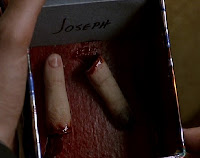 But the way that director and co-writer Scott Derrickson (who later went on to make the underrated The Exorcism of Emily Rose and the not-at-all-underrated The Day the Earth Stood Still remake) either ignores or dismisses the majority of the series' distinctive elements indicates a lack of interest in what makes something a Hellraiser movie and not just some generic, cheap thriller. Inferno is absolutely a generic, cheap thriller, a bad movie with or without its Hellraiser elements. Doug Bradley returns as Pinhead and tones down the camp of Hell on Earth and Bloodline for his handful of scenes, and he is effectively evil. But the rest of the acting in the movie is pretty terrible, especially from lead Craig Sheffer, who plays a sleazy Denver police detective.

Sheffer's Det. Thorne is a pretty big douchebag: He cheats on his wife with prostitutes, snorts cocaine constantly, thinks nothing of blackmailing his upstanding partner (Nicholas Turturro, doing what he can) and beats up informants for information. Sheffer's manic performance makes the guy even more nasty, as his constant sneer and raised eyebrows make him look like he's always leering at something or someone. After discovering the puzzle box (the one familiar element that gets any real screen time) at a crime scene, Thorne finds himself haunted by disturbing visions and pursued by a mysterious killer and criminal mastermind known as the Engineer. As Thorne tries to track down the Engineer, he occasionally encounters a few cool new Cenobites (including a modified, torso-only version of the chatterer from the first two movies) but barely ever runs into Pinhead until the very end of the movie.

Derrickson throws in all sorts of surreal, nonsensical touches, including a roadside bar that is inexplicably full of old-timey cowboys playing poker and a psychiatrist/priest (James Remar) who gives Thorne the worst advice ever. Thorne is so creepy that you kind of just want Pinhead to rip off his flesh already, and thus the movie has no sympathetic or interesting characters. It goes light on the gore and apparently has a slight Christian subtext, which is the biggest possible inversion of Clive Barker's vision. The annoying twist ending tries to say something deep about the way that we construct our own hells, or something (I guess this is the spiritual message), but it succeeds only in making the previous 90 minutes seem even more pointless. Inferno is a terrible thriller, a terrible horror movie and a terrible continuation of the Hellraiser series, a thoroughly inauspicious start to the franchise's post-Barker years.
Posted by Josh at Friday, October 28, 2011

Seriously not much of a horror film fan are you ? The acting was bad by Craig how ? Also how do you figure him to be creepy and you say this is a cheap, not very good horror and I must ask again how you came to this conclusion ?

Actually, I'm a big fan of horror movies, which is why I bothered to spend a whole week watching the Hellraiser series, and why I write about horror movies quite often. I'm not a big fan of bad movies, though, and this is a bad one.

Sheffer's performance isn't creepy in a scary way (which is what you'd want in a horror movie), but more in an off-putting, unpleasant way, making the character who should be the sympathetic protagonist into a lascivious dirtbag. The acting is really hammy and over-the-top and emphasizes the worst qualities of the character, which is where I thought the performance failed.

I think the production values are low and the story is incoherent, and I think the rest of the entry pretty well explains why I thought this was a bad horror movie.