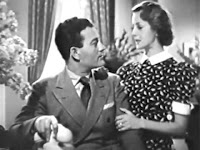 Murder mystery The 13th Man was one of a reported 20 features that Monogram Pictures released in 1937 alone, and its rudimentary plot, acting and production values certainly mark it as a cheap quickie. Unfortunately, it doesn't have much in the way of sleazy B-movie appeal; instead it's mostly dry and dull, a straightforward mystery with cardboard characters and a tidy, quick ending. Even at just 70 minutes, it feels long, and it especially drags when focusing on the DOA romantic subplots. Star Weldon Heyburn brings occasional flashes of charm to his role as newspaper columnist and radio personality Swifty Taylor, but they mostly serve as reminders of how much more entertaining the movie would be with a more charismatic lead. 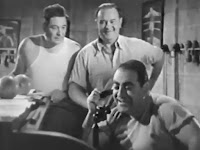 It would also help if the plot were at all interesting. The title refers to the forthcoming next target on the list of a crusading district attorney. After indicting 12 of what he believes are the city's worst criminals, he announces his plans to target a 13th, and he helpfully names a number of possible candidates in a radio address. Having given numerous people motives for his murder, he's then predictably killed (by poison dart!), and Swifty sets about investigating the murder (while the one cop on the case seemingly spends all his time sitting behind his desk). Although Swifty's reporter colleague ends up getting himself killed while searching out clues, Swifty remains a pretty flat character, speaking in essentially the same tone of voice whether he's rattling off his pun-filled radio segments or consoling his dead colleague's fiancee. 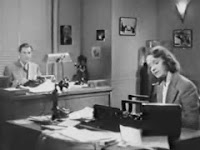 Swfity's romance with his devoted secretary is practically nonexistent; she spends the entire movie pining away for him, and then at literally the last moment he announces that he's going to marry her, despite the fact that they've never kissed or been on a date or even had a conversation about something other than work. At least Swifty's doomed co-worker and his fiancee seem to have some actual chemistry (and the poor guy gets killed on their wedding day). At the end, Swifty literally gathers all the murder suspects in a room and explains the process by which he discovered the guilty party, and somehow they all go along with this even though a number of them are noted underworld figures. It's a perfunctory, bland resolution to a perfunctory, bland film. The studio was probably on to producing the next one by the following week.
Posted by Josh at Monday, July 13, 2015