Dartmoor Killing (Gemma-Leah Devereux, Rebecca Night, Callum Blue, dir. Peter Nicholson) There's some promisingly eerie atmosphere at the beginning of this slow British thriller, but it never really pays off, and the plot proceeds extremely slowly to some highly dubious reveals. Devereux and Night play two friends hiking in the Dartmoor hills, where they meet a mysterious (but really, really obviously sinister) local who takes them in. Despite his extreme creepiness, both women are immediately hot for him, which means it takes them a while to figure out that he's a homicidal maniac hiding a dark secret from the past involving one of the women. Director and co-writer Nicholson seems to be going for a vibe of slow, creeping dread, along the lines of The Wicker Man or Picnic at Hanging Rock, but he only gets the slow part right, and once the plot twists start coming, they don't make much sense. Add in the somewhat lethargic performances (even in the moments of supposed heightened intensity), and you end up with a thriller that slowly loses steam even as it heads toward its violent finale. Available on Netflix.

The Thinning (Peyton List, Logan Paul, Calum Worthy, dir. Michael Gallagher) Most of the original content on YouTube's paid-subscription service YouTube Red is slightly higher-caliber versions of typical YouTube programming, featuring some of the biggest YouTube stars doing what they've already done to become popular, just on a larger scale. Even the handful of YTR feature films are often documentaries that expand on the idea of YouTube stardom. But The Thinning is a full-on sci-fi drama, combining elements of Divergent, The Hunger Games and The Purge in a blatant attempt to capitalize on the YA teen-dystopia trend (although it's not based on any existing material). It features social media star Logan Paul in one of the lead roles, alongside Peyton List as a pair of teens who challenge the future system in which five percent of the population is culled every year via a standardized test for grades 1-12. It's a ridiculous concept that doesn't stand up to even the most basic scrutiny, and the movie's low-budget suspense comes primarily from characters crawling through absurdly spacious air ducts. The acting is poor, the writing is sloppy, and the haphazard world-building is incredibly weak. I was sort of impressed by what seemed to be a remarkably bleak ending, only to be disappointed by the cop-out twist that sets up a sequel I hope will never arrive. Available on YouTube Red. 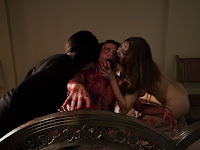 Vampyres (Veronica Polo, Christian Stamm, Marta Flich, dir. Victor Matellano) Apparently this is a remake of a 1974 cult exploitation classic, but I've never seen (or, honestly, even heard of) the original, so I can't comment on how this new version compares. Hopefully the original is better than this mess, though, or at least has higher camp value. Shot in Spain and set, apparently, in the English countryside, it's the inscrutable story of a group of campers who encounter a couple of lesbian vampires in an old house in the woods. That's the most I could get out of the elliptical, impressionistic plot, which involves a lot of characters wandering aimlessly through the woods. The dialogue sounds like it was run back and forth through Google Translate, and the actors offer up a mishmash of accents and often sound like they learned their lines phonetically. There are a handful of evocative images, along with plenty of nudity, and for a certain cult audience, that's probably enough (there are also cameos from some exploitation stars I'm not familiar with). But overall, director Matellano seems to be trying too hard to evoke the low-budget weirdness of genuine cult cinema, and self-designated cult classics almost never actually become what they aspire to. Available on Amazon and elsewhere.
Posted by Josh at Wednesday, November 02, 2016