The opening scenes of The Children reminded me a bit of the early scenes of Home Alone, of all things, as the unruly children of an extended family run amok while the adults attempt to rein in the chaos for a planned Christmas celebration. Given that I once wrote about Home Alone as a stealth horror movie, maybe that's not so surprising, and The Children cleverly builds on the sense of unease in that family chaos as it takes its turn into full-on horror. As someone who can't stand children, I always appreciate when they are used as villains in horror movies, possibly because I view them all as tiny terrors anyway. Writer-director Tom Shankland effectively plays with the tension between self-preservation and the instinct to protect children, as the kids slowly turn homicidal and start attacking their parents. 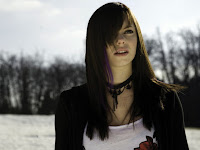 It takes a good half hour for that to get going, and for much of the movie it's possible to read the situation as an exaggerated version of familial conflict, the children reflecting the obvious strain among the adults. Eventually the supernatural nature of the attacks becomes clear (even if the specific origin never is), but there's still more going on here thematically than just "kids go crazy and kill adults." Sisters Elaine (Eva Birthistle) and Chloe (Rachel Shelley), along with their husbands and children, gather at Chloe's isolated rural home for Christmas, and while everyone is all smiles when Elaine and her family first show up, the cracks in the facade begin almost immediately. Mainly, Elaine's teenage daughter Casey (Hannah Tointon) resents being dragged along on the family trip instead of getting to hang with her friends, and doesn't much like her stepdad Jonah (Stephen Campbell Moore). 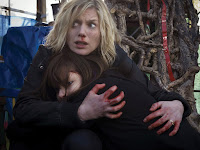 Sullen, brooding teen Casey, with her stereotypical dark, skull-adorned clothes and dyed hair, turns out to be the stealth heroine of the movie, her inherent distrust of both adults and young children making her the first to realize that something very wrong is happening. It also makes the adults reluctant to believe her, and a lot of the tension comes from viewers knowing that the children are on the verge of lashing out (they keep vomiting up some strange goop, and get vacant, dead looks in their eyes), while the adults go on obliviously squabbling about their parenting philosophies and dubious business ventures. 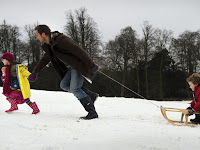 Once all hell breaks loose, though, Shankland never goes too far over the top, making each of his moments of gruesome violence count, and building tension by splitting up his characters around the sprawling estate. The movie has a strong sense of place, playing with the unsettling sights of the increasingly malevolent kids suddenly not being where they're supposed to be. The adults are whiny and self-centered enough to sort of deserve what happens to them, but not so annoying that you want them to get killed right away. Little bits of back story (Elaine and Chloe's issues with their own mother, Elaine's past abortion, Chloe's husband's leering interest in Casey) are revealed organically, without derailing the suspense or taking attention away from the children as the main antagonists. The ending hints at a larger epidemic of killer kids, but the movie closes on a more personal note that keeps the threat within the main family. Because at Christmastime, that's really the source of the most trauma.
Posted by Josh at Wednesday, December 20, 2017

Email ThisBlogThis!Share to TwitterShare to FacebookShare to Pinterest
Labels: 12 Horrors of Christmas, Movies