Almost Paris (Wally Marzano-Lesnevich, Michael Sorvino, Abigail Hawk, dir. Domenica Cameron-Scorsese) You'd think that Martin Scorsese's daughter could land a better project for her feature directorial debut than micro-indie Almost Paris, but given the lack of skill on display in this movie, maybe it's better that Domenica Cameron-Scorsese didn't get a more high-profile shot. A thoroughly phony and unconvincing family dramedy, Paris follows the creaky indie template of the big-city guy returning to his small hometown and reconnecting with his roots while falling in love with a girl from his past. Here it's former financial VP Max (Wally Marzano-Lesnevich, who also wrote the script in an obvious bid to showcase himself) moving back in with his parents, plus his sister and her husband and young daughter, on Long Island. It seems like the movie takes place around 2008 or 2009, although that's not entirely clear, and the filmmakers make a clumsy attempt at social commentary about the subprime mortgage crisis that fits awkwardly with the Hallmark-level romantic storyline about Max pursuing a sweet toy-store owner (Abigail Hawk). The dialogue is stilted, the performances are stiff, the jokes fall flat, and Cameron-Scorsese's direction is bland and lifeless. Maybe she needs a few more lessons from her dad. Available on Amazon and elsewhere. 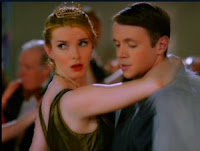 Future '38 (Nick Westrate, Betty Gilpin, Tom Riis Farrell, dir. Jamie Greenberg) Somewhere around the intersection of a Guy Maddin movie and a Saturday Night Live sketch, 1930s sci-fi pastiche Future '38 imagines a lost movie (introduced by Neil deGrasse Tyson!) from 1938, depicting a government agent (Nick Westrate) traveling into the far future of 2018 in order to retrieve a weapon that can end World War II. Of course when he arrives, he meets a dame (played by GLOW's Betty Gilpin) and falls in love, while trying to complete his mission and deal with the unfamiliarity of the future. Shot in a style meant to evoke 1930s filmmaking, the movie can't quite settle on being a parody of how people in the '30s would have envisioned the future, or a parody of modern culture through the lens of the '30s. The dialogue is full of groan-worthy puns and double entendres, but Westrate and Gilpin have great chemistry (and Gilpin is fantastic as an old-Hollywood sassy broad), and they help in getting about half of the jokes to land. It's probably better as a concept than as a feature film, but Future '38 is still a fun watch for fans of vintage Hollywood. Available on Amazon and elsewhere.

Mustang Island (Macon Blair, John Merriman, Lee Eddy, dir. Craig Elrod) Thanks to his lead role in Blue Ruin, Macon Blair became an instant indie-film star, and he made an impressive directorial debut last year with I Don't Feel at Home in This World Anymore. As the star of indie rom-com Mustang Island, though, he doesn't make nearly as strong an impression, and the movie itself feels like a leftover from the Sundance slacker-cinema boom of the '90s. Blair plays Bill, a sad-sack whiner who gets dumped by his girlfriend and drags his brother and his oddball friend to the titular location (a low-rent resort island off the Texas coast) to track her down. While there, Bill meets and falls for a local waitress (Lee Eddy, Blair's real-life wife), and various complications ensue. Director and co-writer Craig Elrod uses minimalist dialogue, abrupt transitions and black-and-white cinematography to give the movie a more distinctive style, but that doesn't enliven the pedestrian story or make the entitled, inconsiderate characters easier to invest in. The jokes are repetitive, and the minimalist style sometimes obscures seemingly important plot points and character relationships. Blair definitely has star qualities, but this movie is a poor showcase for them. Available on Netflix.
Posted by Josh at Wednesday, January 24, 2018