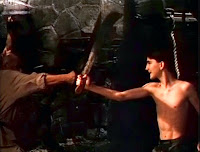 The opening sequence of the micro-budget spy spoof Redboy 13 is actually sort of promising, despite its painfully low production values and questionable acting. The title character (Devon Roy-Brown) is a teenage superspy who's being held captive by a Nazi named Dr. Heimlich Manure (played by writer-director Marcus van Bavel), and his escape from the enemy facility is amusing in a sort of ramshackle, amateurish manner. At its best (which isn't often), Redboy 13 recalls the aggressively goofy spy parody Get Smart (at one point Redboy even uses a variation on a shoe phone), but van Bavel isn't clever enough to sustain the humor for more than a few minutes at a time. After Redboy escapes from Dr. Manure (who talks to a puppet of Adolf Hitler), saves the damsel in distress and blows up the enemy base, the movie has pretty much run out of creativity. 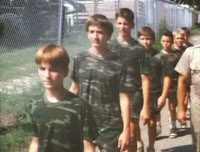 That sequence mimics the typical structure of a James Bond movie, in which the pre-credits scenes feature the conclusion of some previous mission, and then van Bavel transitions to an extremely low-rent version of a Bond-movie title sequence, complete with a Shirley Bassey-style theme song about Redboy, performed by a singer who can barely carry a tune. It's indicative of how far the movie's reach will exceed its grasp over the course of its narrative, as Redboy heads out on a new mission to Central America to stop a drug lord and confront the resurrected Dr. Manure (now a brain in a jar, attached to a monitor). Van Bavel strains to fill the running time, delving into a lengthy, pointless flashback about Redboy's origins (he was recruited out of a military school for boys that seems to have about five students total), and introducing more irritating, one-note characters to sideline the hero from his own movie. 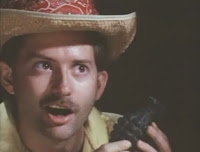 A pair of hillbilly caricatures who serve as Redboy's pilots as he infiltrates Central America are especially irritating in their unfunny ineptitude, and even for a parody, the villain's motivation is confusing and ill-defined. Add to that the terrible special effects (including some bargain-basement homemade CGI), the awkward performances and the limited locations, and Redboy 13 quickly goes from mildly amusing to actively annoying. Van Bavel even bungles the defeat of his own villain, dispatching Dr. Manure so ineffectively that I kept wondering when the movie was going to get back to him. Instead of leaning into its production limitations as an asset for parodying an overblown genre, Redboy 13 attempts to match the high stakes of the movies it's spoofing, and consistently falls short.
Posted by Josh at Tuesday, March 13, 2018