For a while, every time the 13th fell on a Friday, I would make sure to cover one of the movies in the long-running Friday the 13th horror franchise in this space. Eventually, I ran out of options, having to leave off a few movies at the end of the series since they don't have 13 in their titles. But now, in the tradition of 1933's Friday the Thirteenth, here's another movie that shares a title with the adventures of Jason Voorhees but has absolutely nothing to do with the hockey-masked killer. In fact, if IMDb is to be believed, the producers of the more famous Friday the 13th actually had to cut a deal with the producers of Friday the 13th: The Orphan in order to get the rights to the title, since The Orphan was released first (although subsequent releases often omit the first part of the title).

Online reports also indicate that despite its 1979 release date, the bulk of The Orphan was actually shot in 1968, with writer/director/co-editor John Ballard spending the next decade cobbling together the resources for post-production. That protracted editing process might explain why the resulting movie is so incoherent and disjointed, a series of scenes that feel like they were strung together almost randomly, with key elements missing (other online reports claim that the 85-minute version currently available is 30 minutes shorter than Ballard's original cut). Whatever the reason, The Orphan is a complete mess, both tedious and bizarre, with jarring tonal shifts, inappropriate music cues, characters who come and go at random, and a story that's dull and slow until it goes completely bonkers. 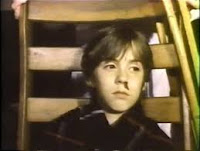 That story is loosely based on the famous short story Sredni Vashtar by Saki, although many of the details are changed and expanded. The main character is young David (Mark Owens), who's apparently witnessed his parents die in a (possibly accidental) murder-suicide, and has now been placed in the care of his stern Aunt Martha (Peggy Feury). Martha keeps David confined to the family's sprawling estate and denies him the pleasures of eating toast (one of the movie's more absurd plot points), and for long stretches The Orphan is mostly just about mundane family squabbles, interspersed with disconcertingly cheery montages set to jaunty music. David's father spent much of his time traveling in Africa, and eventually David builds a sort of shrine to a stuffed monkey his father brought back from one of his trips, and that's when things finally get weird.

The Orphan isn't quite a horror movie, although it features some surreal and grotesque imagery in its final act, and it eventually builds up a modest body count. It's more of a psychological thriller about David's unraveling mental state, although Owens isn't quite a good enough actor to make that descent into madness convincing (to be fair, it's a lot to place on a child actor), and the narrative is too jumbled to convey the progression of David's madness. Instead it just stumbles from one odd image to another, often repeating and doubling back on itself, until the chilling final moment when David finally gets to eat some toast.
Posted by Josh at Friday, July 13, 2018