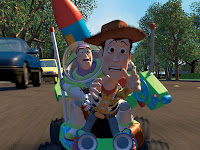 With the current proliferation of computer-animated movies, it's easy to forget how revolutionary Pixar's Toy Story was when it was released in 1995. The idea of a full-length feature created entirely via CGI that could rival the hand-drawn animated movies from Disney was unimaginable just a few years earlier, and probably still unimaginable to many when Toy Story was released. From the perspective of 2019, Toy Story looks a bit unsophisticated, with animation less detailed and elaborate than in much lower-profile current CG-animated movies (and the human characters are stuck in the uncanny valley). But even if Pixar's animators didn't have as many strands of hair or facial details to work with, they still make every character distinctive and appealing, and it's a testament to the creativity of this movie that even as CGI technology has improved drastically, the core design of all these characters has remained the same. 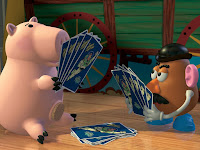 The cutting-edge visuals wouldn't mean much without great characters and an engaging narrative, though, and while Toy Story may seem a little thematically slight compared to later Pixar movies (and to its own sequels), it's still consistently entertaining, with a lively story, clever dialogue and well-drawn characters who've deservedly become part of the Disney pantheon (now that Disney owns Pixar). Tom Hanks' cowboy toy Woody and Tim Allen's space-ranger toy Buzz Lightyear have such great chemistry that I had forgotten that the first movie was about a rivalry between the two, with Buzz as the fancy new toy that young Andy (John Morris) gets for his birthday. Woody is insecure and jealous that Buzz may become Andy's new favorite toy, while Buzz is oblivious to his existence as an action figure and believes that he's a real space explorer.

It's a simple, straightforward story that allows for simple, straightforward lessons about believing in yourself and embracing differences, and celebrates the power of friendship (as expressed in Randy Newman's theme song "You've Got a Friend in Me," easily one of the best songs in Disney animated cinema). Woody and Buzz are both a bit self-centered and inconsiderate, which gets them into increasingly desperate situations as Andy's family prepares to move into a new house and the toys need to ensure that they aren't left behind. But the main characters are never unpleasant or irritating, and their screw-ups come from places of wanting to do better and be better, so they are always likable. The supporting characters are charming and funny, with great voice work all around (it's no wonder that Toy Story 4 plans to use archival recordings of Don Rickles as Mr. Potato Head, since he seems irreplaceable). 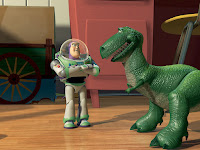 The idea of toys that come to life when kids aren't around is such a strong hook that this movie doesn't need much else. Woody and Buzz's odyssey away from Andy's house drags at times, and its outcome is of course predetermined, but exploring the secret world of toys is the real appeal here. There's genuine creepiness among the cobbled-together toys of neighborhood bully Sid, and there's a sense of wonder to the whole new universe of toys at the kid-friendly arcade Pizza Planet. Toy Story only scratches the surface of a world with endless possibilities. It's a sweet, low-key beginning to a sweeping saga.
Posted by Josh at Monday, June 17, 2019