It's good to know that even in other countries, there are generic crime thrillers that feel like extended episodes of police procedural TV series. The Chinese movie Blood 13 is a dull, rote cop drama about the search for a serial killer who targets prostitutes, aiming for some sort of David Fincher-style darkness but ending up a lot closer to Criminal Minds, or something from the '90s starring Ashley Judd. There's no mystery here, really, since the identity of the killer is revealed halfway through the movie and never called into question, so the theoretical entertainment value is just in watching the two main detectives slowly realize that this guy they have repeatedly been questioning is in fact the killer, then racing to apprehend him. 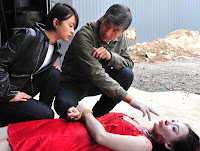 The only mild tension comes from the main detective's prejudice against prostitutes, which is explained in a heavy-handed flashback to her father leaving her mother (presumably because of his habit of visiting prostitutes). But it doesn't have much of an effect on her dedication to the case, and other than a single scene in which she gets lectured about giving sex workers basic respect, it's not a major theme of the movie. That detective, Xing Min (Lu Huang), is a cop-movie stereotype, a reckless lone wolf (note her leather jacket) who never listens to anyone's advice. The movie just uses that as an excuse to place her as a damsel in distress for the last half-hour, though, when she offers herself as bait for the killer and ends up being abducted.

The other detective on the case is veteran Lao Zhou (Gang Xie), who's been obsessed with this killer since failing to catch him 15 years ago. I think he's meant to be a tragic figure looking for redemption, but his habit of carrying around the first victim's skull in a wooden box wherever he goes mostly just makes him seem creepy. The characterization of both detectives is pretty minimal, and the killer is the one who gets the most development, in a long monologue toward the end as he explains his evolution as a murderer. None of it is particularly interesting, and the movie especially drags once the audience knows who the killer is and we have to wait for the detectives to figure it out. It's not surprising that director Candy Li has worked on productions in both the U.S. and China, since she seems to have learned all about making bland, forgettable low-budget cop movies directly from the original source.
Posted by Josh at Friday, December 13, 2019