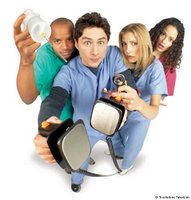 Back at the end of August, a friend of mine was visiting from California and brought his Scrubs season one DVD with him. He'd already watched the entire series in the span of a few weeks (when he decides he likes a show, he doesn't mess around), and he brought it with him to lend to another friend of mine who was a Scrubs fan but had never seen the first season. My other friend watched the DVD within a couple of weeks and gave it back to me, and it was just sitting on my TV, awaiting the next visit from its owner.

So, having heard from these two friends, as well as critics and others, how good the show is, I figured I might as well watch some of it while waiting to return the DVDs. After watching the first couple of episodes, I was fairly disappointed. It's a single-camera comedy that mixes in dramatic elements, so it's not meant to be as joke-oriented and laugh out loud funny as something like Seinfeld, but I found the humor sort of feeble a lot of the time. The peripheral characters, like the cruel janitor, the faux-nice chief of medicine Dr. Kelso and the super-sarcastic Dr. Cox, were more annoying than endearing to me, although I found the four main characters to be likeable and fairly well-rounded. If I had caught these initial episodes when they first aired, I doubt I would have made the effort to tune in every week to watch the show.

But since the DVDs were just sitting there, and I found the show pleasant enough to watch, I kept going. It took less time to watch the 22-minute Scrubs episodes than the much longer episodes of the show I'm watching from Netflix right now (The Prisoner), and it was more satisfying to watch a program from beginning to end while sitting down to eat dinner than just flipping around the channels for 20 minutes. Pretty soon I had made it through the entire 24-episode season. And, really, even though it was perfectly nice to watch, my opinion of the show hasn't changed. Those secondary characters are still annoying. The jokes still aren't that funny. I do like the central characters, and their development over the course of the season was well handled and held my interest. After hearing for so long about how this was one of the best or even the best comedy on TV, I guess I was expecting something a little more innovative and affecting. Instead, it was more just a way to pass the time. I'm not running out to buy season two or even add it to my Netflix queue, but if my friend happened to leave it behind, I'd probably watch it.
Posted by Josh at Saturday, December 24, 2005