Apocalypto (Rudy Youngblood, Dalia Hernandez, Rodolfo Palacios, dir. Mel Gibson)
As pretty much every review has mentioned, probably the oddest thing about this movie is how conventional it is, a big action spectacle about a guy trying to save his wife and kids from the bad guys, except in ancient Mayan and starring people in loincloths. The advertising has made it out to be some arty, mysterious historical treatise, but it's really just a movie where a jaguar bites a dude's face off. And I think we can all get behind that. Although, the action doesn't really pick up until the second half, and it sort of fits uneasily with the social message that is rather ineffectively delivered. And I don't want to ruin the ending, but it seemed to me that you could easily interpret it as pro-imperialism, which is a little odd, even given Gibson's well-known views (not that I've seen that interpretation anywhere else yet). Wide release Blood Diamond (Leonardo DiCaprio, Djimon Hounsou, Jennifer Connelly, dir. Edward Zwick)
I'm already sort of tired of talking about this movie, which is exactly the kind of feel-good, middlebrow, pandering faux-liberal crap that gets nominated for lots of Oscars. The members of the Las Vegas Film Critics Society are voting on our year-end awards next week, so there is heated email discussion of what's worth awarding, and far too many people think this movie is great. I've already argued it enough, so I'm just going to quote my own email: "I think DiCaprio's a great actor, but his accent was a little shaky, and the character of the white man who sacrifices himself for the greater good of the simple natives was already annoying the first time Zwick did it in The Last Samurai. Connelly I also generally like, but her character was completely unbelievable as a journalist and seemed to exist solely to make speeches and deliver exposition. The love story never clicked, either. And Hounsou, again, a good actor, but how many times must he play the soulful black man who teaches white people about life?" Wide release 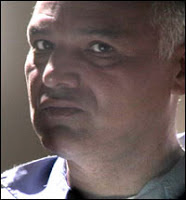 Cocaine Cowboys (documentary, dir. Billy Corben)
My review in Las Vegas Weekly
See, now this is a documentary about drug-running and murder, and yet it's amoral and willing to concede that crime can be cool and even have its social benefits. That's more like it. Opened limited Oct. 27; in Las Vegas this week
Posted by Josh at Friday, December 08, 2006