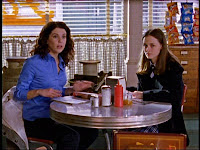 Thanks to a co-worker lending me her DVD sets of Gilmore Girls through season four, I've been able to devote my Netflix queue to other shows and watch the Girls amid various other programs. My initial giddy excitement over discovering the show (way, way later than everyone else, I know) has worn off, and there were moments during this season that I was rather disappointed in the show's direction (sort of amplified by having a vague sense of where it went in the subsequent seasons that I haven't watched yet). But overall I still found it really entertaining and even quite affecting in its best moments, and the two central characters that Amy Sherman-Palladino has created are so wonderful that it's hard to imagine ever not being interested in what's going on in their lives.

But it's increasingly clear as the show goes on that Lorelai and Rory's relationships with each other and with Lorelai's parents are far more interesting than the romantic entanglements that seem to form the central driving force of the show. In the first season, I was sort of indifferent to Max and Dean, the respective love interests, but this season I found almost all of the relationship stuff infuriating. Max was dispatched with rather quickly, but I didn't mind since it was obvious that they weren't going to marry off the lead character. So most of Lorelai's love life this season consisted of her endless will-they-or-won't-they flirting with Luke (which drives me even crazier knowing that it gets dragged out until the end of the sixth season) and possible reconciliation with Christopher, the only love-interest character on this show I find remotely appealing. His relationship with Lorelai seems realistically complex as opposed to the parade of contrivances that mar her relationship with Luke.

Lorelai's love life is far more tolerable than Rory's, though, especially as much of this season finds her vacillating between two almost equally annoying suitors. Dean sort of faded into the background in the first season, and served more as a tool for Rory's social development than an actual character, but the decision to keep their relationship going after the effective break-up arc of the last season proves disastrous here. The quick reconciliation in the first-season finale seemed a little rushed to me, and in this season the characters demonstrated no chemistry or interesting interactions. Dean's blandness was balanced by the supreme annoyance of new love interest Jess, a stereotypical bad boy played broadly by Milo Ventimiglia. I couldn't stand almost any moment Jess was onscreen, although later on he had a few nice moments with Rory when the bad boy facade fell away. Still, the prospect of watching her bounce between these two for another season (or more) is disheartening.

The quirky townspeople got a little more well-rounded in this season, and the dialogue remained as sharp as ever. Along with the main characters, that's the primary appeal of the show, and as long as those elements stay strong, I'll keep watching (even in occasional frustration). I've already started on season three.
Posted by Josh at Wednesday, September 19, 2007