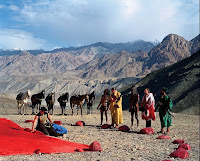 The Fall (Lee Pace, Catinca Untaru, Justine Waddell, dir. Tarsem)
My review in Las Vegas Weekly
I really wanted to like this movie, and I'm actually one of the few people who liked The Cell, but I just couldn't bring myself to invest in it as a story or even a sensory experience. It is, of course, very pretty, in a different way from The Cell, and that does count for something. I was disappointed that I had to watch it on a DVD rather than see it on a big screen, and the theater experience might have improved my opinion of it. Still, the movie's a letdown, especially since it'll probably be another eight years or more before Tarsem gets a chance to make another. Opened limited May 9; in Las Vegas this week

Sex and the City (Sarah Jessica Parker, Kim Cattrall, Cynthia Nixon, Kristin Davis, dir. Michael Patrick King)
First let me say that I have seen exactly one episode of the TV show (which I liked), so my opinion may not carry as much weight as a fan's. But other than the rush of nostalgia, there doesn't seem to be any reason for this movie to exist, as it artificially breaks up everything that appears to have been nicely wrapped up at the end of the series, only to spend two and a half hours pretty much just putting it back together again. There isn't a story here that calls for a movie to be made, nor is there anything said about the new phase of life that these women find themselves in now that they are no longer single or particularly young. The structure is slack and episodic, and drags on interminably through pointless subplots (Jennifer Hudson's character ought to have been excised entirely) and blatant delaying tactics. There are some admittedly funny moments, but they're not nearly frequent enough or funny enough to make it worth slogging through the labored plot developments. At half the length, this might have been an acceptable bit of fluffy entertainment, but in its bloated form the only thing it's good for is giving warm feelings of recognition to people who just aren't willing to let go of their favorite TV show. Wide release

The Strangers (Liv Tyler, Scott Speedman, dir. Bryan Bertino)
I'm disappointed to see all the negative reviews for this movie, especially since a lot of them seem to come from the same preconceived notions that I myself had going in. I didn't expect much from a horror movie that's been delayed for months and is being sacrificed at the box office against a whole bunch of giant blockbusters. But as I watched it, I had to admit that I was completely wrong, and that this is a very effective and scary film. It still has its flaws - Tyler and Speedman aren't quite the acting powerhouses that could transform what is basically a two-character piece into something really moving and powerful, and while they always convey fear and dread well, their performances are a little one-note. Bertino builds tension and suspense very strongly, and for about half the movie, there's a sheer terror to the way the faceless villains slowly and implacably menace the emotionally raw protagonists. The tension reaches a peak and then doesn't actually go anywhere, and the ending provides a disappointing (if admirably grim) resolution. Even with such problems, this is a movie that grabs on and doesn't let go, and never uses needless gore or cheap scare tactics. If it's not a flawless horror movie, it's certainly a lot better than anyone would have expected it to be, and than most critics are giving it credit for. Wide release
Posted by Josh at Friday, May 30, 2008