This movie was hyped as the Blair Witch Project of shark movies when it was first released (after having been a festival sensation), and while it did make a good amount of money for a low-budget indie, it never achieved the following (or backlash) that Blair Witch did. It managed to spawn a completely unrelated direct-to-video sequel, though, and like the filmmakers behind Blair Witch, its director has gone on to do essentially nothing. It was one of those movies for which I encountered the hype long before the film itself, and I remember being sort of underwhelmed when I first saw it (I'd link to my original review, but the Las Vegas Weekly site is undergoing a revamp, and much of the content is inaccessible right now). Coming in with lower expectations this time, I had about the same reaction: This movie is a cool idea that can't quite sustain itself even for 80 minutes. 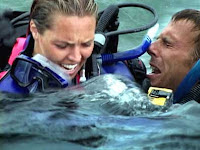 One way I approached the movie differently this time is that I wasn't expecting scares; the normal-sized, normally behaved sharks may be genuinely dangerous, but they seem positively tame compared to movie sharks like those in Deep Blue Sea. Really, though, this movie is far more tragedy than horror, and as time goes by and the two protagonists come to the realization that they are likely to die in the middle of the ocean, whether by shark attack or simply dehydration, you're more sad for them than scared. The acting in the 25 minutes or so of setup is pretty rudimentary, and Kentis' writing shows his impatience for getting to the danger, sketching out only the most basic of character outlines.

Things improve once the married couple played by Daniel Travis and Blanchard Ryan are stranded by their dive boat, and Travis and Ryan do better at conveying fear and hopelessness than they did at conveying everyday coupledom. Kentis allows the viewer occasional rays of hope, only to dash them mercilessly; if this isn't a movie that will keep you up at night with fear, it is one that may keep you up at night despairing at the bleakness of existence. That's undermined a little by some jokey foreshadowing (Travis with his head in a shark statue, laughing) and a cheesy postscript that shows fishermen opening up a shark and finding the couple's camera in its stomach. Plus, there's pandering to the B-movie horror audience with gratuitous nudity, although Ryan has such an amazing body that I'm inclined to forgive this.

The clumsy parts of the movie may point to why Kentis hasn't since been able to make another one: He may have played all his cards with this one, and succeeded with the only thing he's good at. Unless he makes another shark movie, or another movie about people stranded in nature in some way, he may not have anything else he can do (or I could be completely wrong about this). At least he manages some fleeting moments of greatness here.
Posted by Josh at Friday, August 01, 2008