When picking out movies to write about for this project, I didn't just want to feature every stupid B-movie about a killer shark, because there are dozens of those and they're all pretty much the same. In my quest for diversity, I came up with a couple of ideas right away that interested me, and then scoured the Internet for some more possibilities. I came upon numerous lists of shark movies, most of which were not all that helpful, being full of either those generic B-movies or National Geographic specials. However, on one of those lists I found some obscure Italian-Ukrainian horror film called Dark Waters, which seemed like a suitable departure, and was also available to rent from Netflix. I believe the list mentioned some sort of "shark demon" appearing in the movie, but even that tenuous connection turned out to be wrong. 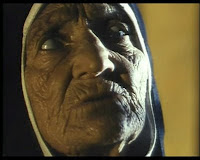 Let me be clear: There are no sharks in this movie. There is an aquatic demon of sorts that shows up at the very end, but to call it a shark demon would be a great stretch - which is to say, entirely inaccurate. But here we are anyway, and having seen it I can say that at least this movie surpassed my general expectations for obscure Italian-Ukrainian horror movies. It was far better than either She Gods of Shark Reef or Shark, and even held my attention for long stretches despite essentially making no sense.

Seemingly the only English-speaking person in a movie that's entirely in English, Louise Salter plays a proper British twentysomething who travels to an unnamed island off the coast of an unnamed Eastern European country to visit the isolated convent where she was born and lived for the first seven years of her life (though she doesn't remember any of it), and to which her father had been donating money regularly until his recent death. She wants to ... investigate ... something? It doesn't really matter. She shacks up in the convent and basically wanders around running into a bunch of really creepy nuns and seeing disturbing visions and occasionally having people try to kill her. Eventually she discovers the secret of the place, which involves the non-shark demon; some gross devouring of raw fish that wash up on the beach; and her long-lost twin sister, who spends almost the entire movie dressed from head to toe in what looks like a potato sack. Also, all the supporting characters speak with such thick accents that it's almost impossible to understand them. 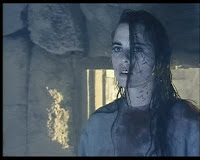 Not that it makes a difference; whatever strengths the movie has are based in atmosphere and imagery rather than plot and dialogue. Baino gets the maximum effect from the inherent creepiness of old churches, continuous rain storms, and Eastern Europe in general. There's a decent James Whale-meets-Dario Argento feel to the production, but that makes it sound cooler than it really is. And the demon, whose presence has been teased throughout the film as unbelievably terrifying, turns out to be the silliest-looking rubber piece of crap you could imagine. A shark would have been much more effective.
Posted by Josh at Thursday, July 31, 2008