Claudette Colbert and the movie-star face

A while back, I acquired a copy of Universal's The Claudette Colbert Collection box set for a review that never ended up happening. Before that, the only movie I'd seen Colbert in was It Happened One Night, and I found her captivating and clever, and immediately wanted to see more of her. I thought I could review this set as a way to experience more of Colbert's work, and when the review fell through, it seemed worthwhile to watch the movies anyway (at a much more leisurely pace). It turns out that this set is probably not the best introduction to Colbert's career, as it's filled mostly with minor films that don't amount to much. Still, sitting through these six mediocre movies showed me how brightly Colbert shines even through the most unimpressive material.

And really, a lot of it comes down to her wonderfully expressive face. Sometimes that luminous movie-star quality actually works against her. In 1937's Maid of Salem, a plodding period drama about the Salem witch trials, Colbert looks consistently out of place as a 17th-century Pilgrim, with her Hollywood vivaciousness shining through the dour surroundings, and as a result she generally just seems like she's playacting. The movie gives Colbert the part of an unusually forward-thinking Pilgrim, yes, so she can espouse tolerant viewpoints and wear "risque" outfits, but even that characterization doesn't compensate for her inherent sass. Colbert's frequent co-star Fred MacMurray looks equally out of place here as a roguish rebel, and the movie surrounding them is awkward and ungainly. 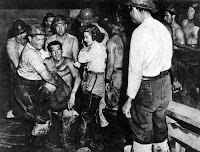 MacMurray shows up twice more in this set, in the romantic comedies No Time for Love (1943) and The Egg and I (1947), and he and Colbert have a nice chemistry. He's got more charisma than Colbert's other male co-stars, and she easily lights up when he's around. But both of those movies are hopelessly dated battle-of-the-sexes hokum, with No Time for Love easily the worst offender. MacMurray's inconsiderate brute practically sexually assaults Colbert's pseudo-independent career woman, and of course his rude, demeaning, macho behavior charms her so much that by the end of the film she's abandoned her artistic, intellectual, fey (read: gay) circle of admirers to run off and be his wife. 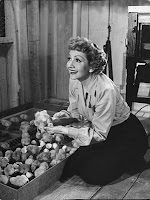 The Egg and I starts where that story ended, with Colbert as a newly married city gal and MacMurray as the husband who decides to pack them both off to a farm in the sticks. It's Green Acres before Green Acres existed, and as such it's pretty much a feature-length sitcom (it in fact inspired an actual short-lived sitcom in the '50s). The movie is best known not for the story of Colbert and MacMurray trying to make a go of it as farmers, but for supporting characters Ma and Pa Kettle, redneck caricatures who went on to star in their own very popular series of spin-off movies. Between the Kettles and the ridiculous Native Americans saying "how," it's a parade of lame stereotypes, and it doesn't help that the whole last act deals with Colbert leaving MacMurray only to realize how important it is for her to subjugate her needs to her husband's (the real woman on whose memoir the movie is based, Betty MacDonald, eventually divorced her version of MacMurray's character).

Part of the reason the subjugating of Colbert's will in these movies is so frustrating is because the liveliness of the actress is in clear contrast to the eventual submissiveness of her characters. In No Time for Love, it's obvious she's got more going on behind those beautiful, wide eyes of hers than MacMurray's lummox ever will, and she's fully engaged in every conversation and negotiation in the entire movie. I found myself during all of these movies watching Colbert even when other characters were talking, and you can see from her subtly shifting expressions exactly how each character feels at any given moment. 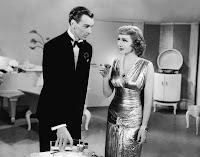 That's true in the other forgettable movies in this set, the 1933 Depression-set family comedy Three-Cornered Moon and the dismal 1937 romance I Met Him in Paris, with Colbert torn between two equally useless suitors. The one movie I actually found entertaining here was 1938's Bluebeard's Eighth Wife, another silly romance but one in which Colbert and her paramour, Gary Cooper as a multimillionaire businessman, actually seem on equal footing. The plot is sort of nonsensical, and the stolid Cooper is seriously miscast, but the dialogue by Billy Wilder and Charles Brackett sparkles, and it's a thrill to see Colbert dive into some exchanges that are actually worthy of her talents. Where the other films seem to work to dim her inner light, this one lets it shine, even if she ends up outshining her co-star. 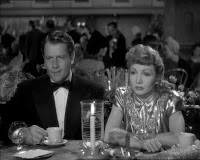 In the midst of watching these movies, I also saw Preston Sturges' brilliant 1942 The Palm Beach Story, with Colbert and Joel McCrea as a poverty-stricken couple who only realize their love for each other after they go their separate ways. It's delightfully weird, as Sturges always is, barreling from New York City urban bickering to a long train sequence to the third act in Palm Beach, where Colbert and McCrea are each paired with love interests who are simultaneously perfect and impossible. Colbert takes every one of the plot's insane turns with glee, and holds interest and sympathy in her character even while making exceedingly poor decisions. It's the kind of part that I wanted to see her in after being grabbed by It Happened One Night, where that charismatic face gets a character to match.
Posted by Josh at Monday, March 15, 2010