It's been years since I was a regular viewer of Desperate Housewives (which is set to finally be put out of its misery at the end of this season), but I still hold a place in my heart for campy nighttime soaps, which is why I'm still gritting my teeth through Gossip Girl and thoroughly enjoying Revenge. So I was hoping for something fun with GCB, ABC's blatant effort to find a new show to replace Desperate Housewives. Like Housewives, GCB has a provocative title (or at least it used to, before the title of the book the show is based on, Good Christian Bitches, was reduced to an abbreviation that stands for nothing), a cast of pretty women in their late 30s/early 40s, and a campy tone that balances the soapy twists with plenty of cheeky one-liners. 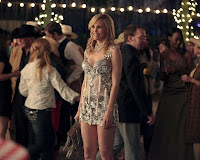 The problem is that GCB is almost entirely made up of cheeky one-liners, and none of them are particularly funny. The show can't seem to decide whether to be a full-on farce satirizing upper-class Texans or a serious family drama dealing with class issues and marital troubles. It ends up failing at both, since while it's trying way too hard to be edgy and clever about suburban Southern values, straining to come up with zingers for its grown-up mean-girl characters, any of the purportedly heartfelt moments become impossible to take seriously. And for an alleged soap opera, the intrigue is decidedly dull. Housewives was built on a series of increasingly absurd mysteries, but at least it felt like something was always at stake. Here the stakes are almost entirely inconsequential, and the comedy isn't strong enough to hold your interest in the absence of any real drama.

The one thing GCB does have going for it is a great cast, including the always appealing Leslie Bibb as the main character, who reluctantly moves back to her Dallas-suburb hometown after 18 years away. Bibb navigated a similar mix of strained wackiness and relationship drama on Ryan Murphy's Popular a decade ago, and she makes for a likable, if sometimes bland, protagonist. Kristin Chenoweth chews lots of scenery as the leader of the devious women who go after Bibb, and both Miriam Shor and Marisol Nichols have been effective in this kind of soapy setting before. Plus Annie Potts, who played a proper Southern lady for seven seasons on Designing Women, is perfectly cast as Bibb's snobby mother.

But they're pretty much all playing to the rafters with only mediocre material to work with, and Chenoweth especially frequently crosses the line into caricature. All of the effort to seem edgy and satirical comes off as desperate, making GCB already seem as tired as the worn-out show it's aiming to replace.