The Leprechaun franchise headed boldly into straight-to-video land with Leprechaun 3, but really the drop-off in quality from the second movie isn't particularly noticeable. Sure, the special effects are terrible and the acting is wooden, but that's been the case from the start. And although as a Las Vegas resident I'm particularly sensitive to woefully inaccurate portrayals of my hometown in movies, Leprechaun 3 actually features far more authentic Vegas footage than some acclaimed Vegas-set movies. Sure, the main casino where most of the action takes place definitely doesn't look to be local (and its sign is just a printed banner slapped over whatever the building's real sign is), and the interiors are pretty inauthentic-looking. But whenever the characters drive or walk around outside, they're clearly really in town (even if this movie hops capriciously between the Strip and downtown as if they're the same place, which is a common shortcut in Vegas movies). 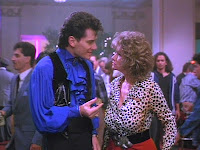 Anyway, no one expects any kind of authenticity out of a Leprechaun movie, so the Vegas footage is really just a nice bonus. It helps distract from the typically nonsensical story, which, in the tradition of Leprechaun 2, completely ignores what happened in the previous movies and strands the leprechaun in a new place with new powers and a new backstory. This time he's trapped in some sort of statue by a mystical amulet whose powers are never explained. First he was vulnerable to four-leaf clovers, then to wrought iron, and now to this chintzy-looking amulet. The leprechaun is accidentally freed and immediately starts in on his typical mayhem, tracking down "me gold" and punishing those who've taken it (or just maiming and killing them for fun).

Another new bit of mythology this time around has the leprechaun's coins granting one wish each to any person who holds them, while in the second movie anyone who trapped the leprechaun was given three wishes. Also, the wishes come true independently of the leprechaun's magic, so several characters actually get what they want, including the moronic main character Scotty (John Gatins) winning big at the Lucky Shamrock casino, a frumpy roulette dealer becoming (allegedly) young and hot, and the lecherous casino owner getting a hot young magician's assistant to lust after him. Most of these people end up with "ironic" comeuppance from the leprechaun eventually, including a ridiculous scene in which he makes the newly hot woman's breasts, ass and lips expand so much that she explodes.

There's a lot of camp humor like that in this film, which is even more overtly comedic than the previous installments. But that humor is pretty feeble -- the leprechaun does a lot more rhyming, but it's all really lazily constructed (coming up with clever rhymes is not that easy), and most of the snappy one-liners fall flat (I did like the description of the casino's crappy magician as someone who "couldn't pull a rabbit out of a pet store"). The plot goes in some random directions, including making the leprechaun into some sort of werewolf/zombie/vampire-like creature whose bite starts to turn Scotty into another leprechaun (complete with terrible Irish accent by Gatins).

Warwick Davis, as usual, does his best as the leprechaun, and invests some of the ridiculousness with a sense of fun. Like Leprechaun 2, this movie ends abruptly, like the filmmakers just ran out of time and money, as the main male and female characters kiss and walk off smiling as if they didn't just blow up a demented magical leprechaun. No worries, though; chances are no one, including the leprechaun, will remember that any of it happened by the time the next movie rolls around.
Posted by Josh at Monday, March 19, 2012