The dull, dreary morality play Officer Thirteen runs only 59 minutes, but it feels like twice that, with its slow, monotonous story about a wholesome police officer killed in a hit-and-run accident and his wholesome partner's quest for justice. Shot in the flat, static style of a lot of early talkies (albeit with some inadvertently fascinating footage of 1930s Los Angeles), Officer Thirteen starts with some lead-footed comedy about jovial police officers Tom Burke (Monte Blue) and Sandy Malone (Charles Delaney) pulling over a horrifying Italian stereotype and letting him go thanks primarily to his wacky accent, then teasing Sandy's son and his friend before very unsafely riding them to school on their motorcycles.

Things turn serious, however, when Sandy takes off in pursuit of a speeder who ends up deliberately running him off the road into a ditch. The accident doesn't look serious when it happens onscreen, but it apparently ends up being fatal, and the grief-stricken Tom takes it upon himself to avenge his partner and take care of the man's elderly mother and cute son (played by a young Mickey Rooney). This involves a lot of hectoring "crime does not pay" nonsense, culminating in a raid on a gambling joint where the killer has been holed up. The movie takes on corruption (the killer gets off because his boss, who owns the illegal casino, bribes top officials), perjury (the killer's girlfriend initially lies for him at his trial) and the twin scourges of illegal gambling and driving over the speed limit, with all of the bad guys getting their comeuppance and the heroes remaining morally pure. 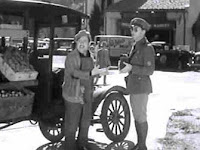 Tom is so stolidly heroic that he not only achieves justice for his dead partner but also takes care of the dead man's entire family, stands up to his bosses at the police department, and almost single-handedly reforms the killer's girlfriend, Doris Dane (Lila Lee), turning her from a gangster's moll into an upstanding citizen who makes her judge father proud and an eventual surrogate mother for Sandy's mop-topped kid when she decides to marry Tom. He's such a great guy that he even manages to turn his unlucky badge number (13, of course) into a sign of good luck. The movie is similarly bland and upright, with wooden performances, stiff dialogue and turgid pacing. It's designed simply to teach the audience a lesson, but the lesson mainly is that movies like this are a terminal bore. (Watch the whole thing yourself at the Internet Archive.)
Posted by Josh at Tuesday, August 13, 2013