With so many summer franchises returning this year, I'm catching up on previous installments.

After the disappointment of watching Mad Max, I didn't have high hopes for The Road Warrior, but I was much more impressed with director George Miller's sequel. I wouldn't say that I was blown away, but I could definitely see how this movie has become a beloved classic, and its influence on so many other post-apocalyptic movies is obvious. With a larger budget, Miller was able to stage even more impressive stunts, and he also does a better job of sketching the post-apocalyptic world, providing the context that the first movie was missing. The plot is still pretty thin, and the characterization is minimal, but at least this time the action and the atmosphere make up for it.

Suddenly Max's world is way more post-apocalyptic than it was in the first movie, even though an opening recap of sorts tries to make it seem like this is a natural progression. Narration explains that wars and a scarcity of oil have turned the world into a wasteland, and the police force and tranquil home environments that supported Max in the first movie seem to have disappeared. (There's no mention of Max's wife, who was still alive in the hospital at the end of the previous movie.) Max wanders the Outback in his badass car, evading the marauding gangs that are so familiar from the pop-culture representations of the series. He comes across a colony of survivors who are trying to move their tanker of precious gasoline to the coast, for reasons that are not entirely clear, and he reluctantly agrees to help them escape the gang's attacks. 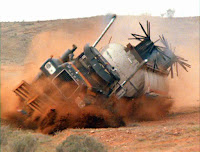 That's it for the plot, which leaves a lot of motivations and logistics vague. It's clearly secondary to the action, which Miller once again stages with energy and style, helped by all the crazy vehicles he gets to use and all the colorful characters (the mohawk and assless chaps seem like impractical attire for the villain, but they do look cool). It's pretty amazing what Miller can do without the aid of CGI, and the stunt work here deserves all the acclaim it gets. But even so, I got kind of bored after a while, since I didn't really care whether Max succeeded in his plan to get the survivors to safety (partly because he didn't seem to care much either). The mute, feral boy (whose adult self is revealed as the narrator) is kind of endearing, but none of the characters really held my interest. Mel Gibson's stoic performance carries more weight than his performance in the first movie, but Max by design is a sort of inscrutable figure. I suppose for fans this movie is a triumph of style over substance, but while I admire the style, it only carried the movie so far for me.
Posted by Josh at Monday, May 11, 2015