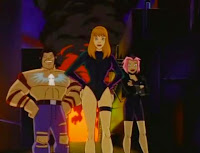 In a way, Gen 13 was ahead of its time: These days, DC churns out several PG-13-rated direct-to-video animated movies a year, based on specific comic book storylines and geared more toward hardcore fans than general audiences. In 2000, it was more of a risk to adapt the Wildstorm/Image superhero team Gen 13 (created by Jim Lee and Brandon Choi) into an animated movie aimed at adults, complete with surprisingly intense violence, swearing and sexual situations. And sadly, the risk did not pay off: The movie was never officially released in the U.S., since Wildstorm was sold to DC Comics before the scheduled release, and Touchstone Pictures parent company Disney apparently wasn't interested in releasing a movie based on a property owned by a rival studio (DC parent company Warner Bros.), even before Disney owned Marvel Comics. The movie ended up with a limited home video release in some foreign countries, and it's pretty easily found online. 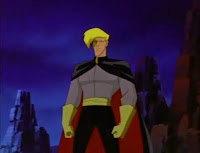 Not that it's really worth looking for, unless you're a hardcore fan of the Gen 13 comics. It's a creative failure as well as a logistical one, a poor adaptation of what was a fun (if inconsequential) superhero series that took a lot of cues from Marvel's X-Men spinoff New Mutants. The mature elements feel out of place, the plotting is on the level of a really long pilot for a Saturday morning cartoon, the animation is subpar and ugly, and the voice acting (even from animation pros like Mark Hamill and E.G. Daily) is stilted and awkward. Artist J. Scott Campbell gave the comic book a distinctive look, but none of his style comes across in the movie, which looks like a generic late-'90s action cartoon. 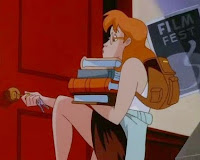 The plot is an extremely slow-paced origin story, focused on just three of the original five team members, with one other making a couple of brief appearances and one left out entirely. It's mainly about Caitlin Fairchild (voiced by Alicia Witt), who's recruited into the top-secret Project Genesis program that is secretly experimenting on the children of former super-soldiers. Caitlin and her fellow students Roxy (Daily) and Grunge (Flea of the Red Hot Chili Peppers, in a truly terrible performance) undergo training and gradually discover the secrets of the facility, led by the evil Ivana Baiul (Lauren Lane) and the smarmy supervillain Threshold (Hamill). It isn't until the movie's climax that the characters actually get their superpowers, and before that they deal with a bunch of clumsy humor and ineffective suspense. 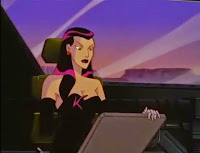 The action sequences from director Kevin Altieri (an animation veteran with numerous episodes of Batman: The Animated Series to his name) are generic and sometimes confusing, especially the long, drawn-out finale. The excessive violence (with multiple bloody character deaths) feels gratuitous, as do a few early semi-explicit sexual references, and they don't add anything to the storytelling. If anything, they make it feel less mature, like a teenager trying to sound grown-up. The movie never got an MPAA rating since it was never released in the U.S., but it probably would have been a hard PG-13, skirting up against an R. That's a poor fit for a movie that otherwise would be best suited for an unsophisticated tween audience. Years later, DC figured out a better balance for this kind of movie, and has done strong business with its PG-13 home-video features (although the ones I've seen have been mediocre at best). Gen 13 was probably better off being left on the shelf.
Posted by Josh at Wednesday, May 13, 2015