Bette Davis' final film in her 18-year career at Warner Bros., Beyond the Forest is mostly known for its extraneous qualities, from the behind-the-scenes battles that led to Davis' departure from Warners, to her later comments about its low quality, to the bad reviews (including a designation from the founder of the Razzies as one of "the most enjoyably bad movies ever made"), to the iconic Davis line ("What a dump!") that's generally used as a clip without any context. Although it's still mostly regarded as terrible, Beyond the Forest has also picked up a cult following of sorts, like any campy movie with big stars tends to do, and some critics have re-evaluated it as subversively brilliant.

I fall somewhere in the middle, I suppose. Watching the movie, I had kind of forgotten about its reputation, so aside from waiting for that famous line (which is such a throwaway that I never would have guessed it was particularly notable), I wasn't focused on how notorious it apparently is. Mainly, as usual with these lower-tier Davis movies, I was watching for Davis' performance, which is vampy in the extreme, possibly because she held the production in such contempt and just decided to let loose on what she felt was a poor script. Davis plays Rosa Moline, a vain housewife who's contemptuous of her small Wisconsin town and her square doctor husband Lewis (Joseph Cotten). 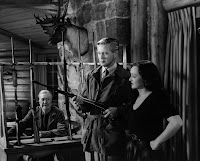 Rosa dreams of moving to the big city (Chicago, just because it's the closest), and is having an affair with a rich businessman named Neil Latimer (David Brian) who clearly does not care about her at all. The movie is sort of a tragedy about Rosa's ambitions ruining her happiness and ultimately leading to her death (after she attempts a self-induced abortion by literally throwing herself off a cliff), but Rosa is such a haughty, mean-spirited person that it's hard to sympathize with her. Davis is great at playing these kinds of imperious villain figures, but the movie doesn't seem to know whether Rosa is actually a villain or not, and so Davis' nasty line readings don't have much of an impact.

Poor Joseph Cotten plays the world's blandest, most upstanding man, who endures all of Rosa's abuse with saintly patience, takes her back after she runs off with Neil and then is rejected, and serves his small-town patients with compassion and dignity, even if they can't pay. The dynamic between them is so lopsided that there's no interest in them staying together, but there's also no reason to want to see Rosa end up with Neil, especially after she commits murder just to keep word of her pregnancy a secret. Seeing Rosa end up dead isn't very satisfying, either, since she's at least partially a victim of sexist expectations of women (and possibly of unspoken racial prejudice, according to some viewers who read her as Latina, although that's never explicitly stated).

Director King Vidor puts together some striking compositions (as is often the case, Davis makes sure to get great lighting during her most dramatic scenes), and the story is so increasingly over-the-top that it's at least an entertaining train wreck. It's not quite insane enough to qualify as a camp classic, and I think the people who read sophisticated social commentary into it are reaching too far. But it's far from Davis' worst film, and it's certainly far from the least memorable (any number of 1930s cheapies outweigh it there). It's at least worth a look from anyone interested in Davis' late-period turn toward camp icon.
Posted by Josh at Friday, March 27, 2020