I'm not sure I should even bother including the 1959 biopic John Paul Jones in my Bette Davis series, since Davis' appearance in it is so brief that in the intro to the TCM showing I recorded, Ben Mankiewicz referred to her role as a cameo. Davis gets a splashy "special appearance" title card all to herself in the opening credits, but she only shows up for about four minutes near the end of the movie. The rest of the two-hour-plus movie belongs to Robert Stack as the title character, a hotheaded naval commander considered one of the founders of the modern U.S. navy. 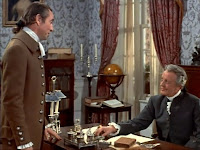 The final film directed by John Farrow (father of Mia, who briefly makes her first onscreen appearance at age 13), John Paul Jones is a lavish but stilted military epic, full of bombastic patriotism but very little human emotion, even in its attempts at depicting its title character's romantic dalliances. Stack is stiff and robotic as Jones, like an exhibit in Disney World's Hall of Presidents, playing the rough-and-tumble Scotsman as a humorless scold who condescendingly dismisses pretty much all of his colleagues as spineless idiots.

The characterization may not be far off, since the real Jones was known for his questionable leadership tactics and possible criminal activities as much as for his bravery and strategic insight. But this movie glosses over any sordid aspects of Jones' life, portraying him as unerringly honorable and correct, whether arguing with the founding fathers of the United States or facing down a rival British sea captain. He comes off as equally pompous when interacting with his love interests, neither of whom get much screen time or make much of an impact on the story. Charles Coburn brings some earthy wit to his performance as Benjamin Franklin, whom Jones befriended during the Revolutionary War when he was based in France, but he's the only cast member who brings one of these historical figures to life.

And what about Bette Davis? She plays Russian Empress Catherine the Great, who employed Jones' services for a few years after the war, and she's appropriately regal in her brief appearance, even getting to speak some Russian and French. After that, though, it's back to Stack's bloviating, which continues all the way to Jones' deathbed. The movie is framed by modern-day Navy footage, connecting Jones to the integrity and honor of the contemporary American Navy, in a way that plays like an extended recruitment film. Given the movie's lackluster sea battles and self-important blowhard of a hero, though, it's hard to imagine it convincing anyone to sign up for military service.
Posted by Josh at Tuesday, April 07, 2020