Am I Jamie Kennedy's next victim? 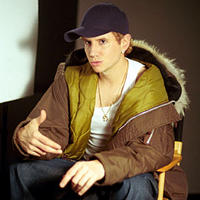 I received an e-mail earlier this week from a Michael Addis, who's making a documentary about Jamie Kennedy called Heckler. According to Addis, he's following Kennedy on his current stand-up comedy tour, documenting both the comedian's live performances and the way he's dealt with negative criticism about his work. He asked if I'd be willing to do a short on-camera interview for the movie about the role of the critic, while Kennedy is in town playing two shows at Harrah's. I assume Addis contacted me because of my extremely negative review of Malibu's Most Wanted, in which I compared Kennedy to Pauly Shore (Addis, perhaps not coincidentally, was a producer on Shore's recent reality show Minding the Store).

I am always happy to whore myself out for free publicity, so at first I jumped at the chance to appear. I still plan to do it, but, remembering Kennedy's old WB hidden camera show, The Jamie Kennedy Experiment, I'm starting to wonder if I and other critics who agree to appear are going to become the butts of jokes. I've seen enough episodes of The Daily Show to know how easy it is to use interview footage to mock someone. It's clear to me that Addis is a legitimate filmmaker, and a post on the official message board of Kennedy's site indicates that a documentary really is being made, so that's encouraging. And as long as I'm willing to laugh at myself, I suppose there's no harm in opening up to the risk of ridicule. It couldn't be much worse than having to sit through another Jamie Kennedy movie.

(Of course, since I e-mailed Addis several days ago agreeing to appear in the movie as long as it wasn't a prank, I've yet to hear back from him. Hmmmm.)
Posted by Josh at Sunday, October 16, 2005

I suppose most who read the post of this Critic? felt a simple ? andmight've needed to consult Mister Webster about Critic no matter how high the indivuals intellect. And then laugh. This guy apparently doesnt at all understand comedy based upon his criticism of Mr.Kennedy. Then Isupposed the-slapback may be then why is he Critic? Well folk I form the assumption because he has a loud arrogant mouth.....Everyone will listen to ramble and laugh.......He may not understand comedy but he's a big joke....ha ha ha ha ha.

Well, you certainly got me there.