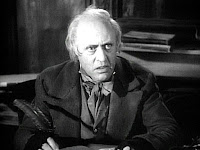 Known in Britain by its original title, Scrooge, this is considered by many to be the definitive adaptation of Charles Dickens' classic A Christmas Carol. And while I am in many ways myself a modern-day Scrooge, and not that long ago scoffed at the most recent attempt to bring this story to the big screen, I actually thought this movie was quite good. Obviously it follows the same basic beats as every other version of the story (A Christmas Carol is one of the least-altered stories to be adapted this many times), but it does so with a sense of weight and solemnity that is very effective, and Alastair Sim is fantastic as Ebenezer Scrooge, making him less a reformed villain than a tragic hero from start to finish. 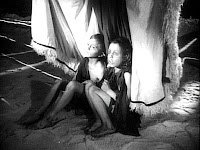 I tend to sympathize with the pre-reformation Scrooge, and find it irritating when his attitude turns around seemingly at random. But Sim makes it clear from the start that the sullen version of Scrooge is a deeply unhappy man who doesn't know how to react to the world around him, and his bitterness hides a deep sadness. When the Spirit of Christmas Past takes Scrooge on a tour of his life's failures, you can see the pain in Sim's eyes, and understand how his disappointments over a period of years drove him to become not so much a mean person as one who has just given up on life. 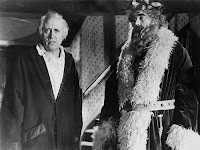 Even when Scrooge realizes the error of his ways, there's a sort of manic desperation to Sim's performance that gives the sense that the guy is just grasping at straws, willing to try anything to crawl back from the despair that his life has become. He seems genuinely happy at the end of the movie, less from contrived plot developments and more from sheer willpower. This is the only version of A Christmas Carol I've ever seen in which Scrooge seems to actually earn his turnaround. 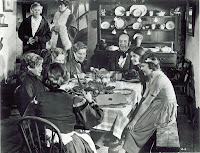 Sim carries the film, but the supporting performances are solid as well, and the direction gives the sense of grandeur without resorting to CGI roller-coaster rides like Robert Zemeckis did (also, I realized after watching this movie that Jim Carrey's performance in Zemeckis' film is essentially an Alastair Sim impression). Scrooge's foreboding mansion feels musty and lived-in, and the sets in general have an appealing sense of Victorian grime. For once, this story feels vital and real and not like a tired obligation.

The True Meaning of Christmas: Compassion for and solidarity with one's fellow man.
Posted by Josh at Saturday, July 03, 2010