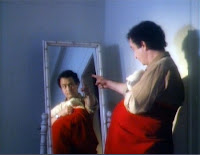 In the pantheon of Christmas horror movies, Christmas Evil (known originally as You Better Watch Out) seems to occupy a significantly lower place than Black Christmas and Silent Night, Deadly Night, and I wasn't expecting much out of it other than some low-budget gore and maybe a little bit of camp. Imagine my surprise, then, when what I saw wasn't some lame slasher movie but a surprisingly gritty psychological thriller, with a great lead performance by Brandon Maggart. Yes, this is a movie about a guy who takes his love for Christmas so seriously that he eventually dresses up in a Santa suit and kills people who don't properly appreciate the spirit of Christmas. But it's also a serious, slow-building study of insanity, a movie much less concerned with titillating violence than with the peculiar childhood traumas that can scar people for life.

In Harry's case, that's having the Santa Claus myth shattered when at a young age he witnesses his mom doing more than just kissing Santa Claus, who is of course really Harry's dad in a Santa suit. Instead of growing up and accepting reality, Harry becomes a single-minded Christmas fanatic, spying on the kids in his neighborhood, keeping elaborate logs of their naughty and nice behavior, filling his home with Christmas decorations and working in a toy factory where he constantly complains about the shoddy craftsmanship. Most of the movie is a chronicle of Harry's descent into madness, as little slights against Christmas chip away at his sanity. In its portrait of an unhinged loner losing his grip on reality, set in a scuzzy urban landscape, Christmas Evil has more than a little in common with Taxi Driver (seriously). 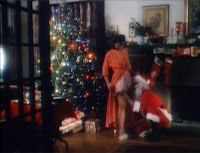 And when Harry finally snaps and puts on his homemade Santa suit, he spends as much time spreading his manic version of holiday joy as he does meting out yuletide violence. What Harry really wants is to be Santa Claus and to be appreciated. When children smile at him, he smiles back and gives them toys. He only stabs people with Christmas decorations when they don't appreciate the value of his generosity. Maggart perfectly conveys Harry's mix of joy and madness, and even as Harry gets crazier and crazier, there's a sadness in Maggart's eyes that feels real. The movie ends on a bizarre note suggesting that Harry may actually be Santa Claus, but in a weird way he's the perfect guy for the job.

The True Meaning of Christmas: You better appreciate it, or Santa will fuck you up.
Posted by Josh at Saturday, July 17, 2010