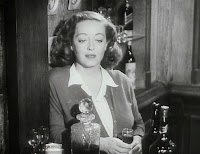 There are a surprising number of Bette Davis movies about people swapping identities; Davis herself twice played twins who take over each other's lives (in 1946's A Stolen Life and 1964's Dead Ringer), and she also played a supporting role to Alec Guinness as a victim of mistaken identity in 1959's The Scapegoat. Another Man's Poison features Davis as a devious mystery novelist who kills her husband only to find herself stuck with an impostor (Gary Merrill, who was Davis' real-life husband at the time). Almost the entire movie takes place in the luxurious mansion owned by Davis' Janet Frobisher, a stiflingly ornate location that adds to the sense of characters being trapped in circumstances of their own making.

Merrill's George Bates shows up on Janet's doorstep demanding to see her husband, with whom he recently committed a bank robbery. When Janet reveals that her husband is dead, George decides to pose as his late partner, whether Janet wants him to or not. The rest of the movie involves a slow unraveling of their plan, thanks to Janet's much younger lover (the fiance of her secretary) and a meddlesome veterinarian neighbor who just loves solving the mysteries in Janet's novels. The plot doesn't quite hang together, and the intense romance between Janet and her beau isn't quite believable (I obviously love Davis, but she comes off as far too matronly for the young pretty boy here). 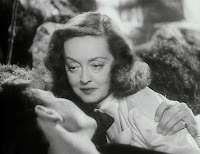 Still, Davis is always fabulous at scheming and delivering cutting insults, and she makes Janet into a combination of liberated woman and conniving harridan. Merrill is a little less compelling, but Davis generally has a tendency to overshadow her leading men, and he does a good job of selling George's desperation. The ending offers both main characters ironic comeuppance straight out of an EC Comics story, although its darkly comedic twist is a little at odds with the more staid tone of the rest of the movie. The script was reportedly being rewritten throughout the production, and the result is a movie whose tone is as inconsistent as its plot (although both have their occasional charms).
Posted by Josh at Monday, October 07, 2013