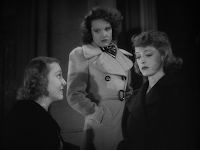 In one of the Bette Davis documentaries I've seen (I'm not sure which one), Davis talks about the lack of vanity she brings to her performances, and she mentions specifically the 1937 film Marked Woman, in which her character, "nightclub hostess" Mary, is beaten badly by the gangsters against whom she is planning to testify. When the makeup department put her in fake-looking bandages, Davis left the set, drove to her doctor's office, described the injuries the character was supposed to have received, and returned with such realistic-looking wounds that the studio security guard thought she had been in a car accident. 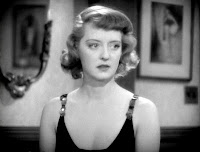 Davis indeed looks much more realistically injured than the average 1930s movie character when Mary is in the hospital, and the movie overall has a fairly gritty, semi-realistic feel. It was inspired by the real-life conviction of mobster Lucky Luciano, although names and details were changed (and the movie even features a prominent disclaimer declaring it a work of complete fiction). Most importantly, Mary and the other female main characters can only be vaguely implied to be prostitutes, and instead are depicted as "hostesses" whose job is to "entertain" male customers at the mob-owned nightclub so that they will gamble more. This actually seems like a pretty innocuous job, so it doesn't make that much sense when Mary is so ashamed to reveal her true profession to her upstanding college-student sister (Jane Bryan). 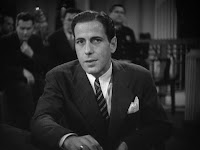 That sister is the catalyst for the more melodramatic second half of the film, in which Mary decides to testify against her former bosses and is targeted for intimidation and physical harm. Davis embraces Mary's anguish, but the morality play (with Humphrey Bogart as a crusading prosecutor based on Thomas Dewey) is less entertaining than the seedy underworld drama that precedes it, with Davis as the tart-tongued dame who isn't scared off by her dangerous bosses or her lecherous clients. Overall, it's a great role for Davis, who gets to show off her range (it came after she unsuccessfully sued Warner Bros. for stranding her in a string of lame roles in B-movies), and the sanitized moralizing is at least followed up by an admirably downbeat ending. The journey to get there, however, is a little uneven.
Posted by Josh at Tuesday, October 08, 2013