It's generally foolish to expect sensitivity in old Hollywood depictions of racial minorities (or often in newer Hollywood depictions of them, for that matter), but Bordertown has a higher success rate than most, even if much of its treatment of Mexican-American lawyer and businessman Johnny Ramirez (Paul Muni) remains insensitive. Obviously that starts with casting the Austrian-born Muni as a Latino, but he makes more of an effort to inhabit the role than, say, Charlton Heston in Touch of Evil, and you can't fault him for doing his best once he's taken on the part. Johnny is an ambitious man with a short temper, and the first third of the movie shows him both as a self-sacrificing hard worker (getting his law degree from night school, then dispensing free legal advice to the community) and as a self-sabotaging hothead (tanking his first real case thanks to being ill-prepared and prone to violence). 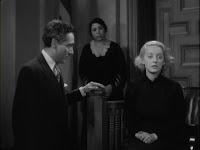 But the movie is really about Johnny's second career as a nightclub impresario, in which he demonstrates plenty of business savvy as well as self-restraint. Bette Davis shows up as the wife of Johnny's business partner, throwing herself at him so wantonly that she practically tears his clothes off. Yet Johnny is so upstanding that he rebuffs her every advance; he's also apparently so irresistible that she eventually kills her husband so she can be with him. Davis gets to do two of the things she does best in this movie, first playing the bold seductress and then playing the unhinged crazy woman when she goes insane with guilt over having murdered her husband.

Meanwhile, Johnny ends up in bed with another woman who throws herself at him, played with delightful nastiness by Margaret Lindsay. Lindsay's character is a slumming socialite who calls Johnny "savage" and rebuffs his marriage proposal after stringing him along. She represents the hypocritical attitude of whites toward a rich Latino like Johnny, who can dress in fancy clothes, run an upscale nightclub and make tons of money, but will never be regarded as anything other than low-class by his white patrons.

Unfortunately, the movie seemingly ends up endorsing the same attitude; after escaping the clutches of the crazy women who are after him and selling his club, Johnny returns to his Los Angeles neighborhood having learned his proper place. He vows to remain among "his people," a disappointingly racist and classist conclusion for a movie that, at times, does an impressive job of challenging those ideas.
Posted by Josh at Saturday, October 12, 2013