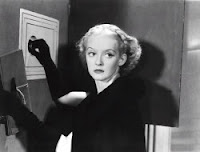 Yes, more than three years after I first embarked on my Bette Davis Month project, I am still busy documenting my efforts to see all of her movies, and since I've got a backlog of Davis movies recorded from Turner Classic Movies, I thought I'd take this week, starting today on the 24th anniversary of Davis' passing, to devote to writing about a few of them. Most of my Davis viewing lately has been of her prolific 1930s output, when she was a contract player churning out whatever the studio decided to put her in. Fog Over Frisco is another one of those, a jumbled thriller with a convoluted plot and a mediocre role for Davis that nevertheless gives her a few moments to shine. 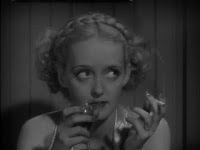 Davis gets top billing and at first seems like the movie's star, playing sleazy socialite Arlene Bradford, who hangs out with gangsters and uses her milquetoast fiance and blowhard stepfather as pawns in a scheme to launder stolen securities. Arlene is the kind of sassy dame Davis excels at playing, and her early nightclub scenes are a blast, as she eagerly attempts to corrupt her wholesome stepsister Val (Margaret Lindsay). But then halfway through the short (just 68 minutes) movie, Arlene winds up dead, and the focus shifts to Val's efforts to find out what happened, aided by a boring newspaper reporter (Donald Woods).

Lindsay is pleasant enough, but doesn't have half of Davis' charisma, and the plotting grows incoherent in the second half, with twists that hinge on characters who barely registered early on. There is a pretty impressive (for 1934) car chase through the streets of San Francisco, but otherwise, once Davis disappears, the whole movie loses its appeal.
Posted by Josh at Sunday, October 06, 2013