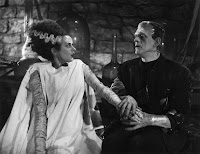 The sequel to James Whale's hugely popular 1931 Frankenstein opens not with Henry Frankenstein (Colin Clive) or his monster (Boris Karloff), but with author Mary Shelley (Elsa Lanchester), her husband Percy Shelley (Douglas Walton) and fellow writer Lord Byron (Gavin Gordon), on the famous stormy night when Mary Shelley envisioned the story of Frankenstein. Mary gives a recap of the story so far, events which of course deviate substantially from her book, and then asserts that she has more of the story to tell, even though what follows diverges even further from her original tale. I suppose it's a way to give the movie a sort of literary pedigree, although the famous authors never return after the introduction, and there's no narration or other indication that Mary herself is telling the story. 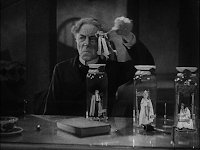 It's one of many odd flights of fancy that Whale brings to this idiosyncratic sequel, which he was initially reluctant to make despite the great success of the first movie. Coerced into returning as director, Whale increases the comedy while maintaining the horror, making a film that is more distinctively his own vision, while losing sight of some of what makes Shelley's novel so compelling. The visuals remain evocative and creepy, and Clive and Karloff once again give strong performances (disappointingly, Mae Clarke is replaced by Valerie Hobson as Henry's wife Elizabeth, and is pretty much useless as a character), but there's so much goofy and sometimes annoying comic relief that the scary moments lose a bit of their power. 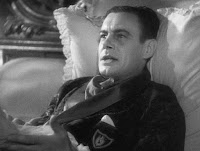 The worst is Una O'Connor as the Frankensteins' maid Minnie, whose grating, hyperactive presence sucks the life out of every scene she's in. She first appears in the opening, as the villagers rescue Henry from the rubble of the burned windmill (he's ultimately fine, as is the monster, of course), and continues to wail in the background of various scenes throughout the movie. The other main comedic detour is the even odder work of Henry's heretofore unmentioned mentor Dr. Pretorius (Ernest Thesiger), who shows up urgently wanting to convince Henry to continue his experiments. Dr. Pretorius, it seems, has been making his own efforts at creating artificial life, and he's produced a number of tiny people he keeps in jars, who embody archetypes like king, queen, archbishop and, uh, mermaid. The movie stops cold for several minutes as he introduces these bizarre creatures in what seems to be a sort of Swiftian social satire (the king sexually harasses the queen, the archbishop admonishes them for having sexual feelings), and then they're never mentioned again, although their creation seems like it would be a much greater feat than what Henry has accomplished. 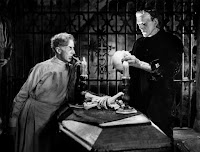 Instead Pretorius becomes Henry's assistant as he works to create a mate for the monster, a plot thread that is actually drawn from Shelley's novel. The movie also features the monster's friendship with a blind peasant, taken from the novel, and it represents the most poignant storyline, as the two lonely outcasts (unlike in the book, the blind man here does not have a family) form a genuine bond that is then cruelly torn asunder by the bloodthirsty villagers still hunting down the monster. Although the monster develops a rudimentary vocabulary here, he's still nothing like the articulate philosopher of the novel, and the creation of his mate is driven more by Pretorius than by the monster himself. That eventual creation, which takes place at the end of the movie, is a glorious sequence even more elaborate and harrowing than the one in the first movie, leading to the reveal of Lanchester as the iconic bride character. But she barely gets a few minutes onscreen before the whole place literally comes crumbling down around her, destroying the monster and his creator once again -- at least until the next sequel.
Posted by Josh at Sunday, October 02, 2016