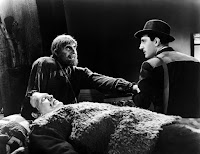 The third movie in Universal's Frankenstein series, Son of Frankenstein marks Boris Karloff's final appearance as the monster, and by this point he's the only link left to the original movie. Colin Clive, who played Henry Frankenstein in the first two movies, died in 1937, and director James Whale declined to return after Bride of Frankenstein (which he took some convincing to agree to make). So Son is less of a unique vision than Whale's two films, but director Rowland V. Lee manages to stick to a consistent tone, without any of Whale's odd flights of comedic fancy, and the movie is still impressive visually, with its expressionistic set design full of odd angles. The Frankenstein family castle often looks like something out of an M.C. Escher painting, with massive rooms that dwarf the characters within, and seemingly endless secret passageways. It looks nothing like the Frankenstein manor from the previous movies, but continuity is not exactly this series' strong suit.

Along with Karloff, Son features '30s genre stars Basil Rathbone (as Henry Frankenstein's heretofore unmentioned son Wolf) and Bela Lugosi (as Ygor, the diabolical hanger-on keeping the Frankenstein legacy alive), and together they create some very entertaining moments. Rathbone brings some debonair charm and a bit of snobbishness to his version of Frankenstein, very different from Clive's manic, obsessive Henry Frankenstein. Apparently raised in America (his background is left rather vague), Wolf returns to take possession of the family estate, but the townspeople (the town is now also named Frankenstein, although I don't remember that being the case in the previous movies) are not very welcoming. They fear he will resume his father's experiments, and of course they are totally right. 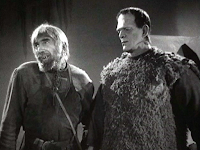 Really, though, it's Ygor who brings the monster back. Supposedly one of Henry Frankenstein's assistants (although he's never been seen or mentioned before), he was arrested for stealing bodies and then hanged and pronounced dead, although he somehow survived despite suffering a broken neck. He's a ridiculous character, and Lugosi plays him with scenery-chewing gusto as he shows Wolf the monster (not dead, of course, despite what happened at the end of the previous movie) and convinces the scientist to help resurrect the creature. Ygor then uses the monster to do his bidding, killing off the men who sentenced him to death. He's totally, gleefully evil, and yet Wolf just blithely trusts him and then seems surprised when things go south.

Lionel Atwill is also entertaining as the local inspector determined to find some wrongdoing at the Frankenstein estate, bringing a bit of camp to his messing around with the inspector's fake arm (the inspector's real arm was torn off by the monster when he was a child, so he has a serious grudge). The longest movie in the Universal series, Son takes its time to revive the monster and start the killing, but once it does, it barrels ahead to the abrupt ending. Apparently there are boiling-hot sulfur pits below Frankenstein's laboratory (another detail never mentioned in previous movies), and they prove the undoing of both Ygor and the monster. Wolf suddenly becomes the hero of the town, bequeathing them the entire estate and heading off cheerily as if he didn't deliberately revive a monster that killed a bunch of people. By the next movie, of course, he'll be completely forgotten.
Posted by Josh at Monday, October 03, 2016