Originally premiered as a two-part TV movie on NBC in 1973, Frankenstein: The True Story was also released in shorter cuts theatrically overseas, and it appears on DVD as a single three-hour movie, which mostly holds together, although a shorter version might have been a little easier to sit through (I admit I broke up my viewing into segments). Despite its unwieldy length, though, True Story is one of the most sophisticated versions of the Frankenstein story ever filmed, and one that should really be more widely appreciated. Contrary to its title (and to an introduction on the version I watched, hosted by actor James Mason, in which he touts Mary Shelley's boundless imagination), True Story doesn't stick closely to Mary Shelley's novel, nor does it incorporate any real details from the author's life. The closest it comes on that last point is in the character of Dr. Polidori (Mason), who's named after one of the people present during the sojourn in Switzerland when Shelley conceived of the Frankenstein story. 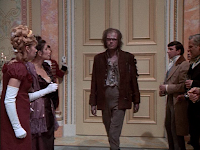 But the movie's Polidori has no connection to the real person; here he's presented as an older scientist who swoops in on the work of Victor Frankenstein (Leonard Whiting) and co-opts it for his own ends, and becomes in a way the movie's villain. He takes over the action in the final hour, but despite Mason's top billing, he has very little presence before then. The first hour or so focuses on the relationship between Victor and his colleague Henri Clerval (David McCallum), who's been reimagined as the true inventor of the process that allows Victor to bring his creature to life. McCallum plays Clerval as an obsessive, moody, unpleasant man whose single-minded dedication to discovering the secret to life pushes away everyone around him, except for Victor. The two form a close relationship that is a bit homoerotic, and when Clerval dies suddenly, Victor puts his colleague's brain into the newly formed creature (Michael Sarrazin).

The focus then shifts to the relationship between Victor and the creature, which also has homoerotic undertones, as Victor teaches the childlike creature to appreciate music and natural beauty, only to lock the creature away as it starts to deteriorate. That's when Polidori comes in, demanding that Victor help him in animating another creature, this one female, although it's less about creating a companion for the original creature than it is about Polidori creating a puppet to do his bidding in an ill-defined plan to take over the world. 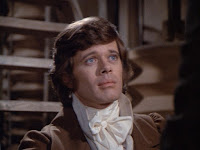 There's a lot of plot packed into the movie's three hours, including riffs on elements from the novel (like the blind man and his family), but it never feels overcrowded, although the shifts in focus are sometimes a bit jarring. As much as it deviates from the novel, the screenplay co-written by noted novelist Christopher Isherwood grapples with many of the same themes, about the hubris of creating a living being, the line between life and death, the complicated relationship between a being and its creator. The creature here never really evolves beyond a rudimentary intelligence, but it does develop emotionally, from a childlike wide-eyed innocence to a grim vengeance, as mirrored in its physical deterioration. That's contrasted with the second creature, this movie's version of the bride of Frankenstein, whom Polidori creates from the remains of the blind man's granddaughter (Jane Seymour). Named Prima, she's cunning and ruthless, and Seymour is great at delivering her sweetly menacing lines. It's a bit disappointing that she's only in the movie for a short time. 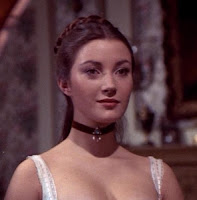 The shorter theatrical cuts of this movie might be a bit more streamlined, but all of its detours are interesting, and until the last 20 minutes or so, the pacing doesn't really flag. The performances are all strong, with Mason and McCallum embodying the mad scientists, and Whiting playing Victor as a sort of hapless, naive bumbler. The climactic confrontation between Victor and the creature is a bit of a letdown (with some poor use of stock footage), but almost everything leading up to it is uncommonly thoughtful, mature and engrossing for a network TV production from the 1970s.
Posted by Josh at Wednesday, October 19, 2016