All this month, I'm looking at the various screen adaptations and incarnations of Mary Shelley's Frankenstein. 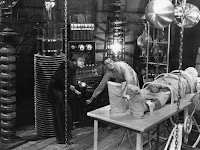 Although it's not the first screen adaptation of Mary Shelley's novel (there were a few short silent versions earlier, including a 16-minute 1910 film made by Edison Studios), James Whale's 1931 Frankenstein is by far the most influential, in a way more influential on the perception of Frankenstein in popular culture than even Shelley's novel itself. So many iconic elements of the Frankenstein mythos come from this movie, including the look of the monster (bolts on the neck, squarish head) and its shambling gait, the villagers wielding torches, the lab full of bubbling liquids and sparking machinery, "It's alive!," the hunchbacked and simpering assistant, etc. Whale creates a series of haunting and memorable images, and Colin Clive (as Frankenstein, here given the first name Henry), Boris Karloff (as the monster) and Mae Clarke (as Henry's fiancee Elizabeth) are all excellent.

As much as the movie is remembered for Karloff's take on the monster, Clive does just as much to set the tone for all future portrayals of Frankenstein, playing him as arrogant but sensitive, driven nearly to madness by his single-minded focus on his experiments. Clarke is sensitive and sympathetic as Elizabeth, even though she doesn't get a whole lot to do, and she's constantly stuck with John Boles as new character Victor Moritz (why could Frankenstein not be named Victor, but his random friend could be?), who sort of leeringly hits on her but also supports her in helping Henry recover from his travails. The most frustrating aspect of the movie is the clash between the evocative gothic horror of the stunning set design and cinematography (including some brilliant tracking shots) and the shticky comic performances of some of the secondary characters. Clive, Karloff and Clarke all give performances that fit with the eerie, expressionist visual style, but then there's Frederick Kerr as Baron Frankenstein, Henry's flustered father, who's just a stock doddering old man character from any 1930s comedy, and his bickering with Lionel Belmore as the Burgomaster.

The plot is also a little rushed (the movie runs just 70 minutes), leaving out and/or changing large chunks of Shelley's novel. She's credited somewhat disrespectfully as "Mrs. Percy B. Shelley," and the movie is drawn directly from a stage adaptation by Peggy Webling, so it has an extra degree of separation from the book. Whale's version of the monster, who only grunts and stumbles around, has become the accepted standard, but even with Karloff's soulful performance, it's still a one-dimensional take on a complex character. Clive gives Henry more nuance, even if he goes over the top in scenes like the monster's creation, and by the end Henry is sympathetic, while the monster (who kills seemingly without consideration) is, well, a monster.

Flaws aside, Whale's film is consistently entertaining, often nimbly mixing horror and comedy, and featuring numerous iconic set pieces, most notably the monster's creation sequence. As an early sound film, its dialogue is sometimes stilted (and it features almost no non-diegetic music), but the visuals are so striking that it could probably work just as well as a silent movie with only a handful of adjustments. Certainly Karloff gets across everything he needs to without ever saying a word, and Clive's facial expressions easily convey Henry's obsession and regret. The story ends a bit abruptly with the villagers suddenly organized into a mob and chasing Henry and the monster into a windmill that they then set on fire, but Whale gives it an appropriate air of tragedy (even if he'd end up undoing much of that with his sequel a few years later).
Posted by Josh at Saturday, October 01, 2016