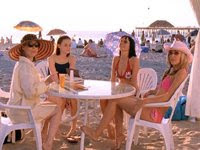 The Gilmore Girls DVDs that my co-worker has been letting me borrow end with season four, which she claims is the point at which the show ceased to be worth watching. This season certainly had its ups and downs, and ended with some unnecessarily melodramatic developments, but it didn't make me want to stop watching the show, and I imagine I'll get to season five as soon as my Netflix queue is a little less crowded (I've grown impatient to start on the next season of The Wire before anything else). 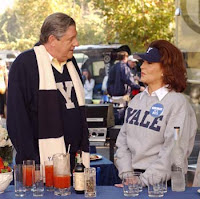 The biggest change and the toughest challenge for this season is Rory's going away to college. Although she doesn't really go very far, and she's back in Stars Hollow with a ridiculous frequency. At the beginning of the season, this development annoyed me, since it meant that Lorelai and Rory, whose relationship forms the core of the show, were apart much of the time, and getting them together required the contrivance of some new made-up town event, or Rory's coming home yet again to do her laundry (she clearly had the dirtiest laundry in all of New Haven). But as time went on, it seemed like the writers got a better handle on how to develop separate storylines for the two characters and make their time together worth more, and things evened out. There's still something lost from the dynamic of the mother and daughter living together and sharing their lives, but I'm now willing to believe that the show can work with them separated. 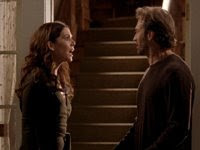 I also thought that this year's love interest for Lorelai, Chris Eigeman's Jason Stiles, was much better matched than her previous suitors, and they had far more genuine chemistry than she did with Max in prior seasons, or that she continues to have with Luke in their neverending will-they-or-won't-they courtship. I get the impression, though, that he's not going to be around for much longer. I even came around a little on bland Dean this season, with his marital strife and sort of sleazy pursuit of Rory, even if the events at the end of the season finale seemed abrupt and out of place. Rory's love life was a disappointment overall, though; Jess didn't become any more likable, and there weren't any other real candidates to replace him and Dean.

Many of the minor characters had richer storylines this year; Lane's estrangement from her mother and Paris' affair with a professor really deepened their characters and made for involving episodes; the one with Paris and Rory on spring break was one of my favorites. And while the separation of Lorelai's parents seemed abrupt, I'm glad to see them getting their own issues to deal with as well. (Kirk only gets more annoying the more they give him to do, though.) I don't know if Rory and Paris' new roommates ever show up again, but I liked them too, and over time they showed more and more potential to grow beyond the one-note portrayals of their initial introductions (much like Paris has). 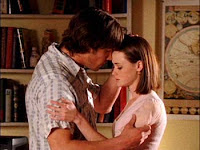 I still love Lauren Graham's performance, and the dialogue is still brilliant when it's at its best. I know a lot of fans grew tired of Alexis Bledel by the end of the show, but for now I think she's handling Rory's growing up (and much larger character changes than Graham has to deal with) pretty well. Maybe the fifth season will go downhill quickly (and I could certainly see that happening), but even though the sparkle of the early seasons has faded a bit, I'm still not ready to give up spending time with Lorelai and Rory.
Posted by Josh at Tuesday, July 15, 2008