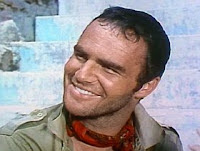 As lame as it is that I had never seen any of legendary genre director Samuel Fuller's movies, it's even lamer that the first one I saw is this shitty Burt Reynolds vehicle that Fuller tried (unsuccessfully) to have his name removed from. It's less about shark attacks than it is about Reynolds brooding and kicking ass as a gunrunner named Caine, who gets stuck in a backwoods town in the Sudan. He schemes to get himself hired as an assistant to an American marine biologist so that he can hijack a boat and get out of the country, but ends up discovering that the scientific mission is a cover for an effort to salvage gold from a sunken ship in shark-infested waters. 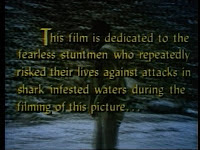 At least, I think that's what the plot is. The DVD I watched (released by Troma!) uses a horribly scratched, washed-out print with dismal sound, so that half the time I didn't know what was going on because I couldn't hear what the characters were saying. I don't think I really missed much - this is a half-baked thriller that only gets mildly exciting when the sharks show up (a stuntman was killed by sharks during filming, making the opening dedication to stunt players, which doesn't mention a death, rather disingenuous).

There are only a handful of shark scenes in the movie, though, with the rest of it dedicated to Reynolds being manly, doing stuff like lighting a stick of dynamite with his cigarette, getting slapped and then kissed by the sultry femme fatale, and engaging in sloppy brawls in which he knocks over everything in sight. He gets a proto-Short Round sort of sidekick he calls Runt, and makes vaguely condescending remarks about Arabs. The sets look flimsy and fake and give no sense of place or circumstance, and the action is pretty much incoherent. Plus, it's all covered with a noxious, almost smooth jazz-style score. Reynolds seems to be trying too hard to channel Marlon Brando, but he has a bit of tough-guy charm. That, and Fuller's reputation, is about all this film has going for it.

(Thanks to the magic of the Internet, you can actually watch the whole thing yourself - with commercials - here.)
Posted by Josh at Sunday, July 27, 2008