This early film from B-movie icon Corman is rather tame by his standards; although it's set on an island inhabited solely by beautiful women (okay, some of them aren't that beautiful), they stay disappointingly clothed throughout the film, and despite the menacing title, there aren't any ridiculous monsters to be found anywhere. The two male protagonists, a wanted criminal and his brother, actually end up wearing far less than the women do, once their ship is wrecked on the titular reef and they end up stranded. The island full of Polynesian-looking women (who speak mildly offensive "primitive" English) is owned by "the Company," like something out of Alien, but it all turns out to be less sinister than it sounds. 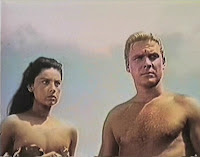 There are no She Gods, per se, although the women do appear to worship some vaguely defined shark deity, which leads to some uninspiring shark footage and a really fake-looking attack at what passes for the movie's climax. The square-jawed pretty boys spend pretty much the entire movie wearing what look like festive island skorts, and somehow invoke an ancient curse by, er, breaking a lei during a silly dance sequence. Not that anything supernatural is really going on here - the sharks are just normal sharks, and not very menacing at that, and the stern old lady who runs the island ends up pretty powerless. The bad brother, who kills a man in the confusing opening sequence, gets what's coming to him, and the nice brother gets the girl who constantly refers to herself in the third person. 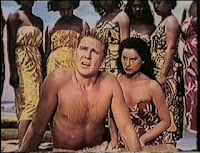 At 63 minutes, it barely qualifies as a feature film, and while shot on location in Hawaii, doesn't look particularly impressive (not that there's a decent-looking print available anywhere anyway). It's a somewhat interesting contrast to the lovingly restored DVD I got at work a few months ago of Corman's 1962 The Intruder, a surprisingly serious melodrama starring William Shatner as a race-baiting weasel stirring up trouble in the deep South. That one was a lot better, in terms of both subject matter and filmmaking, although it did lack the crucial shark element.

(Like Shark, this one is available to watch or download online, although for some reason only in black and white. Check it out here.)
Posted by Josh at Monday, July 28, 2008