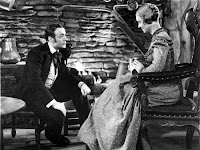 This rather dull period epic was nominated for Best Picture the year it was released, but now seems just kind of quaint and boring (which is probably the case for a lot of dull period epics nominated for Best Picture over the years). Bette Davis plays a thoroughly respectable and yet uninteresting heroine, and that could describe pretty much the entirety of All This, and Heaven Too, based on a real-life murder case that scandalized France in 1847 and was a partial catalyst for the revolution the following year. That makes the movie sound a lot more exciting than it is, though, because for most of the overlong running time, it's a lot of Davis and Charles Boyer staring at each other longingly and whining about the life they can't have because she's a governess and he's a French nobleman with a shrewish wife (Barbara O'Neil). The governess loves the children, the duke loves the children, the duke and the governess love each other, and it's all pretty sappy and really, really slow.

Only Boyer seems remotely French (because he actually was French), and the rest of the actors butcher the occasional French words and obscure any unique cultural context. The annoying kid actor playing the duke and duchess' youngest son sounds like he has a Southern accent for some reason (he drove me crazy with his pronunciation of "mammazelle"). 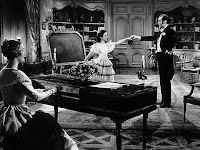 Finally in the last half-hour or so we get to the real intrigue, and the Oscar-nominated O'Neil, playing the more traditionally Bette Davis-esque part, gets to chew some scenery as she rants and raves about her ungrateful husband and the duplicitous governess (who, of course, is actually as chaste as a nun, and less interesting). Then there's a murder and a trial, but any larger historical or social significance is pretty much ignored, and reading the Wikipedia entry about the Duke is nearly as exciting as watching the movie (and takes much less time). He was accused of faking his own death and fleeing to Nicaragua -- that might have made for a fascinating movie. Like Juarez, another snooze-inducing period piece with a respectable Davis performance, this movie was a lavish production with elaborate sets and a huge budget, and that clearly bought it some awards attention. But now it just seems like a dusty antique, and a lost opportunity for Davis to give a memorable performance.
Posted by Josh at Thursday, April 29, 2010

Josh I think you need to watch the film again. This is a classic film with wonderful performances by all the actors. This includes the little boy who I thought was delightful and one of the best part of the film.

Dale you are so right the movie was a master piece am not a big fun of TCM movies but somehow i seemed to sit through this. The boy was perfect he was so cute and so were the girls very charming