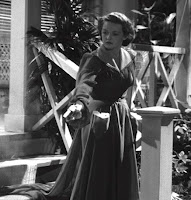 It's clear from the first minute of The Letter that this movie is in much sturdier hands than the previous Bette Davis-starring W. Somerset Maugham adaptation, Of Human Bondage. Director William Wyler commands attention from that first shot, with the camera swooping around the Malaysian plantation of a British rubber baron, eventually settling on the front porch where a man falls down dead, having been shot by Davis' Leslie Crosbie. What follows is a pitch-perfect noir centered around a twist that's obvious but delivered masterfully by all involved, including Wyler, Davis and supporting actors Herbert Marshall (as Leslie's husband) and James Stephenson (as the lawyer defending her from murder charges). 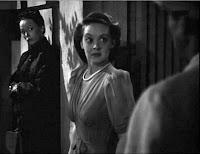 Wyler proves adept both with actors (Davis and Stephenson received Oscar nominations for their performances) and with visuals, talents that come together in the spectacular early scene in which Leslie recounts her version of the crime, slowly and methodically piecing together her story, breaking down just at the right moments - and culminating as Wyler shoots Davis from behind, reenacting her words to the dead man who's no longer there, then moves the camera past her to take on the point of view of her victim as he stumbled out of the house and collapsed on the porch.

There are striking visual details like this throughout the film; Wyler plays with light and shadow not only in the typical noir way (lots of people's faces shrouded in shadows from window blinds) but also in the way he places characters in the frame, so that when Leslie is being particularly devious, she almost repels the light. The actors, too, make use of the way the shots are composed; Davis is a marvel to watch even when she's in the background of the shot, as Leslie reacts wordlessly to the way others perceive her. It's a fantastic performance, but it never overpowers the film. 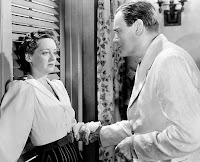 This is also one of those older films that could easily dip into casual racism with its depiction of colonialism, and indeed there is a "Eurasian" character who is basically a white actress in yellowface. That detail (which was mandated by the Hays Code) aside, though, the movie is remarkably nuanced in its depiction of race, especially in the character of Ong Chi Seng, a native apprentice to Stephenson's lawyer, whose deviousness plays into the twists of the plot. Seng dresses in the exact same suits as his white boss, and speaks impeccable, precise English. He's clearly learning the art of deception and corruption from the Western usurpers who now rule his country.

Those complexities of theme and visual style and performance elevate The Letter over your typical '40s potboiler, and into the realm of a true classic.
Posted by Josh at Wednesday, April 07, 2010