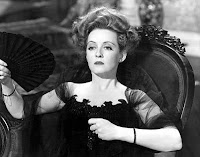 I've gotten used to these classic Hollywood productions wrapping up with happy endings, even ones that aren't earned, or at the very least seeing immoral characters get their comeuppance, so the ambiguity and dramatic complexity of The Little Foxes was very refreshing. It's certainly a big Hollywood production, adapted by Lillian Hellman from her successful stage play and eventually nominated for nine Oscars (including Bette Davis' fifth Best Actress nomination), but it doesn't shy away from moral gray areas or asking tough questions. The bad people get away with a lot, and the good people don't entirely prevail, and no one really comes out of the story better off.

Davis is just one part of a strong ensemble playing a wealthy Southern family in 1900. Davis' Regina and her two brothers are unscrupulous, cutthroat capitalists, who are working to bring a cotton mill to their town by offering a Chicago businessman wages for workers at less than half of what he pays in more liberal parts of the country. Regina manipulates her sickly husband, who controls the money, to get the investment she wants, while all three siblings connive to cut the other out of the profits. Regina's daughter (Teresa Wright) struggles not to become like her mother, and while she's clearly the moral center of the movie, she's often ineffectual and lost. 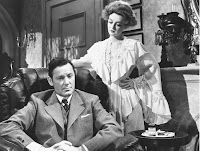 William Wyler directed Davis to some of her best performances (including The Letter and Jezebel), and he once again gets some amazing work out of her. Davis' Regina is cold, contemptuous and just plain mean, treating her daughter and husband with pure venom. The scene in which Regina coldly watches as her husband has a heart attack is masterfully constructed and acted, and Wyler uses blocking and shot composition in a brilliant way to highlight relationships between characters. In a movie based on a play, full of talky scenes, Wyler's visual inventiveness keeps things from seeming staid or inert. He lovingly photographs every look of rage and bitterness on Davis' face, closing the movie with Regina staring out into a world that she's rejected and that has now rejected her, a world that's just as cold and unforgiving as she is.
Posted by Josh at Monday, April 26, 2010