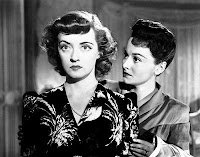 I sought out this movie thanks to an essay by Stanley Crouch, which focuses on the unusually progressive racial politics of the film, and offers it as a counterpoint to Gone With the Wind, which Crouch apparently hates. I admit that I still haven't seen Gone With the Wind, but I think Crouch is probably overreaching here, and the plot points he focuses on don't even come up until two-thirds of the way through In This Our Life. Still, he's right that it has a surprisingly forward-thinking take on racism for a movie from the 1940s, and that along with some excellent acting from Bette Davis and Olivia de Havilland raises it above your typical overheated melodrama.

Davis plays a spoiled Southern girl named Stanley, who is, essentially, the world's worst person. Over the course of the movie, she steals her sister's husband and then drives him to suicide; uses her wealthy uncle's obvious sexual attraction to her to milk him for money; drives drunk and kills a little girl with her car, then flees the scene and blames the crime on her family's innocent African-American servant; tries (and fails) to seduce her sister's next boyfriend; and listens to music far too loudly. Davis is of course excellent at playing this sort of amoral manipulator, and she does a great job of making Stanley's charisma and sex appeal obvious even as she does increasingly unforgivable things. The scenes between Davis and Charles Coburn as her pervy uncle are squirm-inducing and make their sexual subtext clear without breaking any content restrictions of the time period. 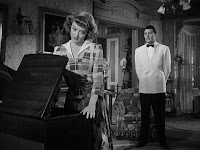 This was only John Huston's second film as a director, after The Maltese Falcon, but he displays an impressive level of control over the material, striking the perfect balance between Davis' magnetic harridan and de Havilland as her saintly sister, who eventually has to listen to her conscience and plot her own sister's downfall. Although de Havilland's Roy is nearly flawless compared to Davis' Stanley, the actress imbues her with a real sense of vulnerability, and there's a distinct horror as we see Stanley's next brazen act coming straight for poor, innocent Roy. We manage to feel both for the selfish murderess and the downtrodden doormat, all the way until the inevitable doomed end.
Posted by Josh at Monday, April 12, 2010