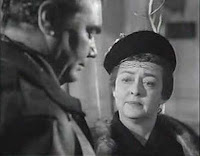 This is such a different role for Davis that honestly for the first few minutes of the movie I didn't even recognize her; I was expecting her to wander in as some other character at some point. But no, there she is as 1950s Bronx housewife Agnes Hurley, looking dowdy and frumpy in housedresses and a complete lack of makeup. I'm so used to seeing Davis as characters who are regal or haughty or glamorous or nasty that it was a shock to see her as this modest, demoralized woman, who latches on to one idea - throwing a lavish wedding for her daughter - as the only ray of hope in her drab life. 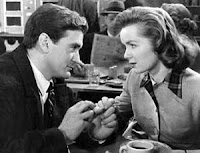 Despite its sort of artificially upbeat ending, The Catered Affair is a seriously pessimistic social-realist drama, with Davis and Ernest Borgnine as the unhappy working-class couple who got married for the wrong reasons, have never loved each other and now can barely provide for the grown children who are about to abandon them. The wedding that Agnes so desperately wants to provide for daughter Jane (Debbie Reynolds, a little bland) nearly tears the whole family apart, and all of Agnes' advice for her daughter on married life involves preparing for inevitable disappointment and drudgery.

The Catered Affair makes weddings and marriage look extraordinarily unappealing, and paints a picture of a deep generational divide between the middle-aged parents of the 1950s and their more progressive children (Jane prefers a small, quick wedding, shares decisions with her fiance, and has pretty clearly engaged in premarital sex). Davis and Borgnine play a couple who have sacrificed everything over the years and have little to show for it, with only a looming future of more sacrifice to look forward to. At the end of the film, Agnes does one nice thing for her husband, but it seems like a hollow victory, and the dream he's hoping to achieve (owning his own taxicab) is depressingly modest.

Davis gives a remarkably naturalistic performance, devoid of her usual arch delivery, and creates real sympathy for a character who makes some exceedingly misguided decisions. In this film, the sentimental thing is absolutely the wrong thing to do, and pragmatism wins out in the end. It may not be a particularly thrilling message, but it rings true.
Posted by Josh at Monday, April 05, 2010