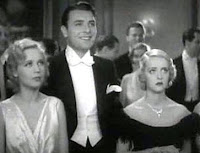 I have my DVR set to record everything involving Bette Davis (shut up), but it missed The Rich Are Always With Us because for some reason the cable guide doesn't list her as one of the stars (even though she plays probably the third most important character). But thanks to fellow online Bette Davis chronicler Stacia at She Blogged By Night (who is far more knowledgeable about classic cinema than I am, and from whom I borrowed a couple of images), I was aware of this as a quality Davis outing, and was able to set it to record when I saw that it was airing on TCM. And I'm certainly glad I did - this is a very entertaining trifle of a movie, with Davis at her glamorous best, playing a wonderfully sassy dame in a movie infused with bubbly energy. 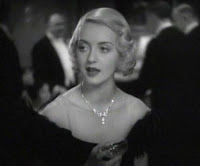 As I said, Davis plays probably the third most important character, and the real star of the movie is Ruth Chatterton, who plays a witty socialite in love with two different men. As this is a pre-Hays Code movie, Chatterton's Caroline isn't bound by artificial morality, and the movie's cavalier attitude toward adultery and divorce is refreshing. Caroline, a filthy rich heiress, is married to a boring stockbroker (of whom she is very fond) but passionately in love with Julian (George Brent, naturally), a much more exciting writer who travels the world as an international correspondent when he's not writing novels. Meanwhile, Caroline's frivolous friend Malbro (Davis) is also in love with Julian and pursuing him relentlessly, and Caroline's husband has his own mistress. Caroline and her husband get a divorce (amicably, for the most part), and she seems to be committed to being with Julian, except she can't quite stop "mothering" (as Julian puts it) her ex. 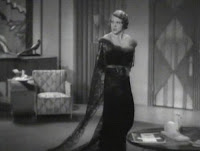 This all sounds like the recipe for some serious anguish, but it's played with a very light touch, and the dialogue sparkles with barbs and innuendos. Chatterton, whom I've only seen in one other movie (1933's Female, in which she plays a career woman tamed by a man), is absolutely terrific, with a lovely sly smile and a wry delivery that imbues her dialogue with both wisdom and cleverness. She and Davis are both sharp and sexy, and they engage in several entertaining sass-offs. Even Brent, whom I've complained about many times in these Bette Davis write-ups, gives a pretty lively performance (for him). The ending gets a little absurd, but the whole thing wraps up in about 70 minutes, with a minimum of moralizing and a breezy, silly tone that lasts until the final frame.
Posted by Josh at Thursday, April 07, 2011