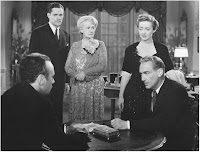 At this point, the most notable thing about Watch on the Rhine is probably that its lead actor, Paul Lukas, beat out Humphrey Bogart in Casablanca for the Best Actor Oscar. Lukas is fine, but there's really no contest between his performance and Bogart's iconic turn in Casablanca. The movie as a whole feels very dated, a fairly didactic morality play about the dangers of fascism and the obligation of right-thinking people to oppose it in any way they can. Lukas plays a German operative of an anti-fascist organization who flees to the U.S. with his American wife (Bette Davis) and three children. A devious Romanian diplomat (George Coulouris, suitably weasely) also staying in the American family's lavish home discovers the true identity of Lukas' Kurt and threatens to expose him to the German government. 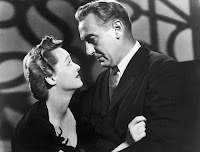 Despite the vague thriller elements, Rhine is more concerned with speeches about moral responsibility and sacrifice than with suspense, and the early comedic elements about the American extended family feel out of place with the seriousness of what comes later. Davis does a respectable job as Kurt's long-suffering wife Sara, but it's a bland character, and she seems content to step aside and allow Lukas to have the spotlight (which makes sense, since she took a small role as a way to get the movie made with Lukas, who starred in the stage version). Despite Lukas' Oscar win, his performance is a bit dry, even when Kurt has to part with his family in favor of fighting for what he believes in. The child actors are also weirdly stilted, as if they were directed to convey their characters' foreignness by speaking in a halting fashion and never using any contractions.

At one point Kurt decries the way that Americans use "noble" in a pejorative way, but Rhine is exactly the kind of thing that you'd think of negatively as "noble." Its intentions are good, and in 1943 it probably seemed very timely, but at this point it's mostly just a historical curiosity.
Posted by Josh at Wednesday, April 06, 2011