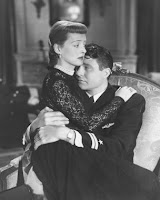 This is not exactly the best way to return to celebrating Bette Davis: Winter Meeting is a pretty dismal, tedious drama, with Bette doing her best but defeated by a morose script and a terrible performance by co-star James Davis, whose delivery reminded me so strongly of George W. Bush that I could not take anything he said seriously (appropriately enough, he went on to greater fame as one of the stars of Dallas). He plays a petulant war hero who falls in love with Bette's poet/heiress for no apparent reason; he basically follows her home like a puppy, parks himself on her couch and decides he's attached to her. Love happens quickly in a lot of old Hollywood movies, and the actors have to sell the heightened emotions as a substitute for extended courtship. James Davis can barely sell being alive, so his sudden infatuation is especially inexplicable.

Bette acts rings around him even while keeping her performance pretty subdued; her Susan Grieve has a bunch of melodramatic secrets, but they're revealed in a measured way over the course of a really long, overly talky scene as Susan and James Davis' Slick Novak sit around a fire and awkwardly open up to each other. Novak has secrets, too, which he also lays out in laborious fashion. It takes more than half the movie to get to this point, though (which was ruined by my cable guide's description), and the fallout from the revelations then feels rushed, just as the whole romance was in the first place. The movie gets points for ending on a down note and actually questioning whether the leads are really meant to be together just because they're good-looking movie stars, but there's no dramatic vitality left by the time we get there. John Hoyt adds a little vibrancy as Susan's clearly gay society friend, but he disappears for long stretches, leaving nothing but strained blather between Bette and her outmatched lummox of a co-star.
Posted by Josh at Monday, April 04, 2011