For last year's White Elephant Blogathan (a sort of movie exchange in which participants submit movie suggestions to a pool and then write about a randomly chosen selection from someone else), I lamented the fact that I ended up with the bland and harmless Dr. Dolittle: Million Dollar Mutts instead of something weird or amusingly terrible. Well, for this year's version, I got my wish, and I think maybe I would have been happier with another Dr. Dolittle sequel: Scorpion Thunderbolt is certainly both weird and terrible, although I was more annoyed than amused by its awfulness. It's a sort of Frankenmovie spliced together from pieces of several different projects, a strategy that director Godfrey Ho and producer Joseph Lai apparently used to churn out dozens of Z-grade exploitation films in the '80s. 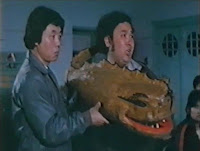 The main portion of Scorpion Thunderbolt is a Hong Kong horror movie dubbed clumsily into English, the plot of which I found almost completely inscrutable for the first hour or so of the 85-minute running time. Eventually there's a huge chunk of exposition explaining that the cheesy rubber snake monster running (and flying, for some reason) around killing people is actually the demure female reporter who has fallen in love with a mustachioed detective investigating the crimes. She's some sort of half-human/half-snake demon who's being controlled by either a blind dude with a flute (in the original footage) or a maniacal witch (in the spliced-in later footage) and being forced to transform and kill random people. I guess. 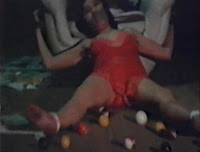 But that's only like 35 percent of the movie anyway. The rest of it is either the completely separate movie (starring go-to Ho/Lai white guy Richard Harrison) or a bunch of seemingly random scenes that have no discernible connection to the plot and feature characters who never appear again. There's some frolicking on the beach like something out of a tampon commercial, a crazed guy who holds a woman hostage and shoots pool balls between her legs, haphazard chase scenes and a whole bunch of other stuff that just kind of passed me by. I have no reason to believe that any of the dubbed-in dialogue relates to what the actors were actually saying in Chinese, anyway. 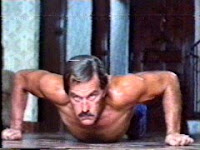 And then there's Harrison, who encounters random hooker-assassins, works out a lot and eventually defeats the evil witch without ever having to interact with the footage of her. His dialogue is also dubbed, but he at least appears to be speaking the same words we hear. His segments come at such staggered intervals that you almost wonder why they bothered to put them in at all, other than a need for an occasional white face onscreen (also, extra nudity from the aforementioned hooker-assassin).

It doesn't help that the DVD I watched has clearly been transferred from an old VHS tape (complete with tracking problems!) that makes the whole thing look like it was filtered through a wet sock. I'm sure connoisseurs of bad movies can find something to enjoy here, and there were indeed one or two moments that were so ridiculous that I had to laugh (the breastfeeding baby that turns into a tiny snake monster and bites its mother's breast, for example). But mostly this is tedious, annoying, worthless trash, and it made me long for the narrative coherence and intelligible performances of Million Dollar Mutts.

Ah well. Was wondering if this was going to at least be fun-bad in a LADY TERMINATOR sort of way. Alas, they can't all be winners.

Thanks again for participating this year.

I have heard a lot of online talk about these pieced-together Godfrey Ho movies, and one of these days I'm going to actually see one. This sounds like something that would be fun to have on while organizing the DVD collection or something. And I suspect booze would help.

I definitely think that both intoxication and inattention would improve the viewing experience for this movie.

Awwww! Sorry to hear this didn't quite click with you - I think it's wonderfully bonkers. I've seen a couple of Ho films, and something about their blithe incoherence/total ridiculousness appeals to me.

Sounds like a bad dream, or a bad acid trip. Sometimes these things defy explanation and you just gotta sit back and enjoy. Great review!

Oh, it's definitely bonkers, but I guess it just wasn't on my wavelength. Still, I appreciate the submission...at least it was something I never would have experienced otherwise.

I am happy to be apart from this movie! didnt click