Buddy Holly had such a short life and even shorter career that there's not a whole lot of material to put in a movie about him, and director Steve Rash ends up altering much of it anyway for the entertaining but insubstantial The Buddy Holly Story. Unlike a lot of showbiz biopics, Story doesn't get to include a rise-and-fall story, since Holly was still going strong when he died in a plane crash in 1959 at age 22. So there's little tension to the story of Holly's success, which involves only mild hardship on the way to universal acclaim. Rash tries to make something of Holly's small-town roots, but the scenes of his parents and girlfriend trying to hold him back don't have much weight to them, and Holly achieves success so quickly that no one really has time to question his choices.

Likewise, the two band members of the Crickets (fictionalized versions of the three real people who played in Holly's band) are mostly relegated to background noise, and their brief conflicts with Holly (annoyed by his embrace of fame, critical of his Latina wife) don't amount to much. I kept waiting for Holly to develop substance-abuse problems, or end up in a toxic relationship, or get screwed over by an unscrupulous music-industry executive, but none of that stuff ever happened. In reality, there were a lot more twists and turns on Holly's road to success (he actually did get screwed over financially by his manager), but Rash chooses to focus on the positive, and it's surprisingly enjoyable much of the time. 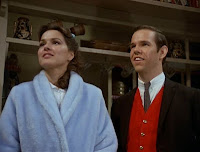 Without a lot of drama to include, Rash focuses on the music, and that's where the movie really shines. While most musical biopics might just show enough of a performance to give the audience the sense of how the music came across, Rash shows Buddy and his band playing numerous songs in full, including an entire performance at the Apollo Theater in Harlem (where Holly and the Crickets won over an all-black audience) and nearly 10 minutes of Holly's final performance before his death. The actors played the music live, so there's an excitement to seeing what ends up looking like a concert movie, even if Gary Busey isn't anywhere near the performer and musician Holly was.

Contrary to his crazy-man persona later in life, Busey gives a solid, measured performance as Holly, and re-creates the songs well enough. He probably didn't deserve the Oscar nomination he got for the movie, but he's still enjoyable to watch, finding nuance in a portrayal of an essentially decent, upstanding guy. Rash makes the curious choice to end the movie without showing any of the drama leading up to Holly's death, but closing on the triumphant note of Holly onstage emphasizes one last time that this is a movie about music, not tragedy.
Posted by Josh at Sunday, October 28, 2012