I'm going to go out on a limb and say that Satisfaction may be the '80s-est movie I've ever seen, or at least the '80s-est movie I've seen in a very long time. It has all the elements you'd need to put together a parody of bad '80s teen movies: a once-hot TV star (Justine Bateman); currently respected actors who are no doubt ashamed of their participation (Liam Neeson, Julia Roberts); "fun" in the sun; beach volleyball; a drug-abuse subplot built mostly around occasional pot-smoking; denim jackets; blazers worn over T-shirts; terrible pop music; a "tough" girl who gets a glam makeover; lame sex jokes; "gangsters" who look like refugees from The Warriors; spoiled rich people who treat our heroes poorly; and Debbie Harry.

Believe it or not, I could go on, but I think you get the point: Satisfaction is pure cheese from start to finish, notable mainly for the people who appeared in it before going on to better things (even Justine Bateman's relative obscurity has to be preferable to starring in this movie). Bateman, hot off the success of Family Ties, stars as Jennie Lee, lead singer of all-girl band Mystery, who get the once-in-a-lifetime opportunity to be the summer house band at a bar in an unspecified beachfront community. Her bandmates include Julia Roberts, in her first film role, as bassist Daryle (the girly girl) and Britta Phillips, these days best known as a member of indie band Luna, as guitarist Billy (the druggie). Mystery picks up a token dude on keyboards and heads to the beach, where they find love, heartbreak, potential fame, etc. 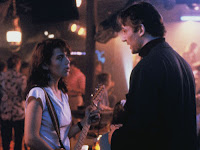 For a movie with so many subplots, Satisfaction feels like it has no dramatic stakes. The love story between Jennie and bar owner/former music-industry hotshot Martin Falcon (Liam Neeson, clearly embarrassed) lacks any passion whatsoever, Billy's recovery from drug addiction basically involves her saying, "Hey guys, I'm not going to do drugs anymore," and the gangsters who show up to menace the band in the movie's climax are completely ineffectual. Even the supposedly important booker about to give Mystery its big break has maybe one or two lines. 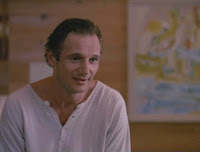 A movie like this is just about having goofy fun, but the beach scenes are tired, and the various musical interludes only highlight the folly of whoever told Bateman she could sing. Mystery's songs are all '80s-fied versions of golden oldies (including the titular Rolling Stones cover), and the only decent musical performances come from Phillips, who provided the singing voice of Jem on Jem and the Holograms and sings lead on a handful of songs in the movie. Going from Jem to teen movies to indie rock is a pretty fascinating career progression, and a movie about Phillips' life would probably have been a lot more entertaining.
Posted by Josh at Monday, October 22, 2012