Even more than 40 years after their show ended, The Monkees are still generally known as a silly made-for-TV band with a catchy theme song, and in 1968 the four members of the group were desperate to change that image. A notorious flop that's since become something of a cult classic, Head failed to reinvent The Monkees, but it's still impressive to see how far the band members were willing to go to present themselves in a new light. Head is light and silly but also extremely bizarre and confounding, and about as far from a predictable sitcom as you can get. It has nothing in the way of narrative coherence or even recognizable jokes, instead careening from one strange set piece to another, often with no connective tissue whatsoever. 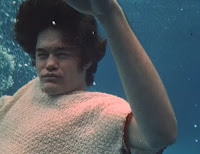 The four band members play themselves, as usual, and the whole thing is apparently some sort of metaphor for how they were being held back by the producers of their TV show (they're frequently trapped in a giant box). Mind you, I only know that because I read it on Wikipedia, and watching the movie gave me no sense of any message or allegory, just a series of nonsensical jokes, sometimes entertaining musical numbers and various stylistic pastiches that don't really fit together. 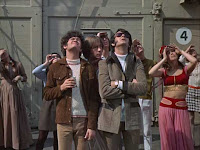 For people who were eager to prove their talents beyond bubblegum pop and sitcom stardom, the Monkees themselves come off as a little lost within their own movie, cracking jokes and singing songs but never really commanding the screen. Parts of Head are fun to watch, but it quickly becomes repetitive (perhaps deliberately so, as the movie returns over and over again to certain locations and scenarios). I don't think I would have been able to sit through the 110-minute director's cut, since 85 minutes ended up feeling interminable after a while. Director Bob Rafelson (who also co-created The Monkees TV series) went on to become one of the most influential filmmakers of the '70s, so it's interesting to see the roots of his style, but Head functions mostly as a curiosity for Monkees fans.
Posted by Josh at Sunday, October 21, 2012