Okay, to be perfectly honest I've been pretty busy putting together all these Rocktober posts and kind of ran out of time to write up a new Triskaidekaphilia entry for this month. But fear not! I've had this piece in reserve for just such an occasion. Since the Las Vegas Weekly online archives now only go back to late 2003, my original review of Thirteen is no longer available online. So here's my take on the movie that ran in print in Las Vegas Weekly on September 18, 2003, now reproduced for online posterity:

Any movie that arrives in theaters with the kind of crushing hype that’s behind Thirteen is bound to have some backlash. For Thirteen -- the supposedly “shockingly realistic” tale of drug use, petty crime and illicit sex among junior high girls -- both praise and criticism can appear to have an ulterior motive, as critics of the film may be accused of being hopelessly out of touch, and its supporters of being taken in by a desire to appear youthful and edgy.

The question of whether Thirteen is a wake-up call to parents, or teens, or whomever it’s intended to be a wake-up call for, is an easy one to answer: It’s only a wake-up call if you were never a teenager, never met a teenager, and perhaps have never heard of teenagers, no matter how old you are. It’s no more a wake-up call than anything starring a Beverly Hills, 90210 alum that you might find on Lifetime. It’s moralistic, broad and over-simplified, but that doesn’t necessarily make it a bad movie.

The premise is as basic as any made-for-TV drama: Good girl Tracy (Evan Rachel Wood) meets bad girl Evie (Nikki Reed). Evie introduces Tracy to drugs, alcohol, shoplifting and sexual experimentation, alienating her from her wholesome friends and her hard-working hairdresser single mother (Holly Hunter). It’s a standard cautionary tale, albeit one with striking performances and a gritty, jittery style courtesy of director and co-writer Catherine Hardwicke. The other writer on the film is co-star Reed, now 15, but only the titular age when she concocted the story, reportedly based on events in her own life. 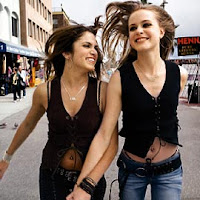 For all the credibility Reed’s influence lends, there isn’t a whole lot of new ground covered here. The evil Evie (geddit?) is the precise opposite of “shockingly realistic,” a cold, manipulative cypher who’s more like the villain in a horror movie, seducing Tracy to the dark side (which takes, like, two seconds), than an actual person. There are disturbing implications, too, to the fact that Tracy’s transformation into a “bad girl” leads her to lesbianism and interracial sex, silently equated with the drugs and the crime. Wood (last seen as the blindingly pure heroine of family flick Little Secrets) is wonderful as Tracy, despite having to cycle through every possible teenage malady (we get self-mutilation and an eating disorder thrown in, too, for kicks) in the space of 90 minutes. Reed’s performance is better than her script, and the film is ultimately watchable and admirably raw, if not the profound revelation it’s been hyped as.
Posted by Josh at Saturday, October 13, 2012